The Last Report on the Miracles at Little No Horse: A Novel (Paperback) 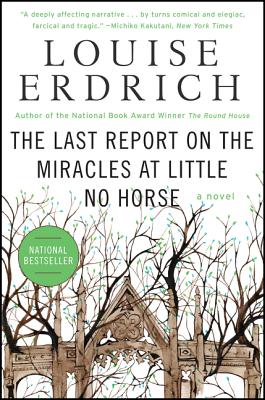 For more than a half century, Father Damien Modeste has served his beloved Native American tribe, the Ojibwe, on the remote reservation of Little No Horse. Now, nearing the end of his life, Father Damien dreads the discovery of his physical identity, for he is a woman who has lived as a man. To further complicate his quiet existence, a troubled colleague comes to the reservation to investigate the life of the perplexing, possibly false saint Sister Leopolda. Father Damien alone knows the strange truth of Leopolda's piety, but these facts are bound up in his own secret. He is faced with the most difficult decision: Should he tell all and risk everything . . . or manufacture a protective history for Leopolda, though he believes her wonder-working is motivated solely by evil?

In a masterwork that both deepens and enlarges the world of her previous novels set on the same reservation, Louise Erdrich captures the essence of a time and the spirit of a woman who felt compelled by her beliefs to serve her people as a priest. The Last Report on the Miracles at Little No Horse is a work of an avid heart, a writer's writer, and a storytelling genius.

Louise Erdrich is the author of seventeen novels as well as volumes of poetry, children’s books, short stories, and a memoir of early motherhood. Her novel The Round House won the National Book Award for Fiction. The Plague of Doves won the Anisfield-Wolf Book Award and was a finalist for the Pulitzer Prize, and her debut novel, Love Medicine, was the winner of the National Book Critics Circle Award. Erdrich has received the Library of Congress Prize in American Fiction, the prestigious PEN/Saul Bellow Award for Achievement in American Fiction, and the Dayton Literary Peace Prize. She lives in Minnesota with her daughters and is the owner of Birchbark Books, a small independent bookstore.

“Nothing less than dazzling.”
— USA Today

"You will be dazzled by the poetry of her language and her lighteninglike illuminations of the human condition."
— Minneapolis St. Paul Magazine