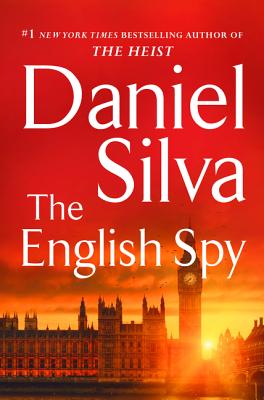 This is book number 15 in the Gabriel Allon series.

First there was THE ENGLISH ASSASSIN.

Then there was THE ENGLISH GIRL.

Master novelist Daniel Silva has thrilled readers with seventeen thoughtful and gripping spy novels featuring a diverse cast of compelling characters and ingenious plots that have taken them around the globe and back—from the United States to Europe, Russia to the Middle East. His brilliant hero, Gabriel Allon—art restorer, assassin, spy—has joined the pantheon of great fictional secret agents, including George Smiley, Jack Ryan, Jason Bourne, and Simon Templar.

Following the success of his smash hit The Heist, Daniel Silva returns with another blockbuster—a powerhouse novel that showcases his outstanding skill and brilliant imagination, and is sure to be a must read for both his multitudes of fans and growing legions of converts.

Daniel Silva is the award-winning, #1  New York Times bestselling author of The Unlikely Spy, The Mark of the Assassin, The Marching Season, The Kill Artist, The English Assassin, The Confessor, A Death in Vienna, Prince of Fire, The Messenger, The Secret Servant, Moscow Rules, The Defector, The Rembrandt Affair, Portrait of a Spy, The Fallen Angel, The English Girl, The Heist, The English Spy, The Black Widow, House of Spies, The Other Woman, The New Girl, and The Order.  He is best known for his long-running thriller series starring spy and art restorer Gabriel Allon. Silva’s books are critically acclaimed bestsellers around the world and have been translated into more than 30 languages. He resides in Florida with his wife, television journalist Jamie Gangel, and their twins, Lily and Nicholas. For more information visit www.danielsilvabooks.com

“Simply delicious. If you’re a fan of perennial No. 1 bestselling author Daniel Silva, it’s a must-read. If you’re not a fan, you should be.... Highly recommended.”
— Minneapolis Star Tribune

“Allon—the legendary spy, assassin and future chief of Israeli intelligence—is an elegant man working in a brutal business….Few authors in the espionage genre handle violent imagery as gracefully as Silva does.”
— Fort Worth Telegram

“It is a world like no other told by an author like no other. If you are not yet a Silva/Allon fan then you are missing out on one of the best series in modern literature.”
— Huffington Post

“Silva is a master craftsman, and his ability to keep Allon’s story fresh after so many novels is to be deeply admired. Weaving in information from previous books while maintaining a propulsive pace, Silva has written a novel that longtime fans and first-time readers can enjoy with equal fervor.”
— Chris Schluep, Amazon Best Book citation

“This page-turner deepens Allon’s legend and illuminates more of his shadowy world, all while cementing Silva’s place among the top tier of spy thriller writers.”
— Kirkus