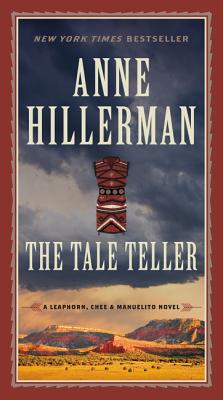 This is book number 5 in the A Leaphorn, Chee & Manuelito Novel series.

Joe Leaphorn may have retired from the Tribal Police, but he finds himself knee-deep in a perplexing case involving a priceless artifact—a reminder of a dark time in Navajo history. Joe’s been hired to find a missing biil, a traditional dress that had been donated to the Navajo Nation. His investigation takes a sinister turn when the leading suspect dies under mysterious circumstances and Leaphorn himself receives anonymous warnings to beware—witchcraft is afoot.

While the veteran detective is busy working to untangle his strange case, his former colleague Jim Chee and Officer Bernie Manuelito are collecting evidence they hope will lead to a cunning criminal behind a rash of burglaries. Their case takes a complicated turn when Bernie finds a body near a popular running trail. The situation grows more complicated when the death is ruled a homicide, and the Tribal cops are thrust into a turf battle because the murder involves the FBI.

As Leaphorn, Chee, and Bernie draw closer to solving these crimes, their parallel investigations begin to merge . . . and offer an unexpected opportunity that opens a new chapter in Bernie’s life.

Anne Hillerman grew up with the stories her father, New York Times bestselling author Tony Hillerman, brought home from his work as a journalist and later as a fiction writer. His storytelling and a deep love of reading inspired by both her parents led Anne to own career as a journalist and nonfiction writer. After Tony’s death in 2008, Anne felt the loss of his beloved characters as deeply as his fans did. His fans’ passion for those stories inspired her to give Tony’s characters a second chance at life and to develop one of his minor characters, Bernie Manuelito, into a central protagonist. Stargazer is her sixth novel and the twenty-fourth in the Leaphorn, Chee & Manuelito series."

“Hillerman’s writing becomes stronger with every new installment in the series, deepening the development of each character. Fans will be intrigued by the intertwining stories that keep them guessing. The picturesque Southwest, as well as the history of the Navajo, come through on each page.”
— Library Journal (starred review)

“A natural hit with Hillerman’s many fans; [The Tale Teller] is also a good
choice for readers who are interested in fiction touching on today’s social issues.”
— Booklist

“The Tale Teller is more than just a police procedural set in the Southwest, it’s a reading experience not to be missed. Anne Hillerman has reached a new level of storytelling in this one, and she deserves recognition as one of the finest mystery authors currently working in the genre.”
— New York Journal of Books