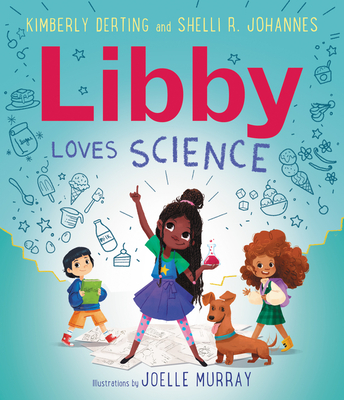 Libby loves science! In this STEM-themed picture book, a companion to the popular Cece Loves Science, Libby and her friends are put in charge of the science booth at their school fair. There’s only one problem: No one is visiting their booth! Does everyone think science is boring?

Libby and her friends use teamwork, creativity, and just a bit of chemistry to turn things around and prove that science is for everyone. Perfect for aspiring scientists, story times, classrooms, home-schooling, and fans of Andrea Beaty’s Ada Twist, Scientist. Includes a glossary and four super-fun experiments to try at home!

Libby Loves Science is just right for fans of Rosie Revere, Engineer and What Do You Do with an Idea? and anyone who loves to ask questions and learn about the world.

Kimberly Derting is the author of the Cece Loves Science series, the Body Finder series, the Pledge trilogy, and the Taking series. She lives in the Pacific Northwest, where the gloomy weather is ideal for writing anything dark and creepy. Her three beautiful (and often mouthy) children serve as an endless source of inspiration and frequently find things they say buried in the pages of their mother’s books. You can visit her online at www.kimberlyderting.com.

Shelli R. Johannes is coauthor of nine books in the Loves Science series (co/Kimberly Derting), Theo Thesaurus series, Shine Like a Unicorn, and Penny: An Engineering Tale of the Fourth Pig (Capstone, Fall 2022).

She is also the critically-acclaimed author of teen novels (written as SR Johannes) including the Nature of Grace series (Untraceable, Uncontrollable, and Unstoppable), Rewired, and On the Bright Side.

She can often be found on highways and country roads saving strays and other jaywalking critters, or volunteering with animal conservation groups like the Atlanta Zoo, the Dolphin Project, and Bosley’s puppy orphanage. After earning a master’s in marketing and working as an executive in Corporate America, Shelli traded out her heels and suits for flip-flops and jeans so she could follow her passion of writing.

She lives in Atlanta with her pack of animals: a British husband, two kids, one bird, one fish, and two crazy Goldendoodles who hate vegetables.

“Libby loves performing science experiments and exploring the world around her. . . . Included are instructions for a series of accessible science experiments with simple drawings making them approachable for young children. . . . A successful marriage of solid information and good fun, this book expresses a love for the topic that will encourage kids to follow their curiosity and develop their own appreciation for science.” — School Library Journal (starred review)

“Joining the ranks of strong girls in STEM [is] Libby . . . Brightly colored artwork bubbles with Libby’s enthusiasm . . . This book is a natural fit for classroom science units and home use.” — Booklist