Her Heart for a Compass: A Novel (Hardcover) 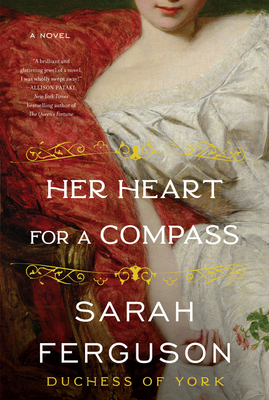 "A brilliant and glittering jewel of a novel. I was wholly swept away by this story."--Allison Pataki, New York Times bestselling author of The Queen's Fortune

“A tale of daring and determination, set against the glamorous heights, and the harsh restrictions of aristocratic society in the middle years of the British nineteenth century."--Sir Julian Fellowes, creator of "Downton Abbey"

From one of the most famous former members of the British royal family, Sarah Ferguson, Duchess of York —a mesmerizing novel of a young noblewoman’s coming-of-age that richly details both high society and low in Victorian England.

Queen Victoria’s close friend, the Scottish Duke of Buccleuch, Lady Margaret Montagu Scott is expected to make an advantageous marriage. But Margaret is an impulsive and outspoken girl in a repressive society where women are, quite literally, caged in corsets and required to conform.

When Lady Margaret’s parents arrange a society marriage for her, she tries to reconcile herself to the match. But shortly before her betrothal is announced, Margaret flees, leaving her parents to explain her sudden absence to an opulent ballroom stuffed with two hundred distinguished guests.

Banished from polite society, Margaret throws herself into charitable work and finds strength in a circle of female friends like herself—women intent on breaking the mold, including Queen Victoria’s daughter Princess Louise. Margaret resolves to follow her heart—a journey of self-discovery that will take her to Ireland, America, and then back to Britain where she finds the life she was always meant to lead.

A bold and thoughtful story about a rebellious woman finding herself and her voice in an age of astounding technological change and great social unrest, Her Heart for a Compass is a delicious costume drama rich in atmosphere, history, and color.

Sarah Ferguson is the Duchess of York, and former daughter-in-law of Queen Elizabeth II. She is also a bestselling memoirist and children’s book author, film producer, and has been a spokeswoman for Weight Watchers and Wedgewood china. These days she campaigns for her Children in Crisis international charity and works on historical documentaries and films that draw on her deep interest in Victorian history. The proud mother of two daughters, Princess Beatrice and Princess Eugenie, and grandmother of two beautiful grandchildren, she lives in Windsor with nine frisky Norfolk terriers.

“[An] intriguing coming-of-age story fans of historical drama are sure to enjoy…the novel…[paints] a rich, believable picture of 19th-century life.” — USA Today

"Sarah Ferguson, Duchess of York, has delivered to readers a brilliant and glittering jewel of a novel, replete with fascinating historical detail, lush lyrical language, and compelling, complex characters who leap from the page. I was wholly swept away by this story, wishing to race through its gripping plot while also lingering to relish each delicious page. This beautiful novel heralds the entry of Sarah Ferguson, Duchess of York, as the new leading voice in Historical Fiction." — Allison Pataki, New York Times Bestselling author of The Queen’s Fortune

"Sarah Ferguson, Duchess of York has looked deep into her own generous impulsive heart to write a compelling story of a young woman who rebels against the restrictive Victorian conventions of her time to find self-fulfilment and love.” — #1 New York Times bestselling author Jeffrey Archer

“Fans of Downton Abbey will revel in everything they love about a big, fat 19th-century yarn.” — Kirkus Reviews

“A tale of daring and determination, set against the glamorous heights, and the harsh restrictions of aristocratic society in the middle years of the British nineteenth century." — Sir Julian Fellowes, creator of Downton Abbey