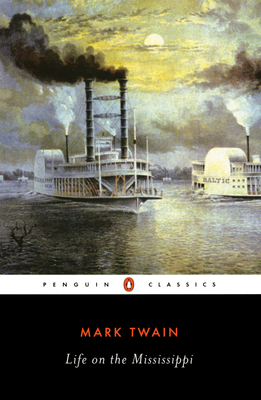 In 1882 Mark Twain returned to the river of his childhood, determined to write the definitive travel book on the Mississippi.

Life on the Mississippi is no ordinary guided tour, for every page is expressive of the structure, style and high humour that is the very essence of Twain the writer. Spiced with Twain's pungent observations and commentaries on the culture and society of the great river valley, the book is a wonderful collection of lively anecdotes, tall tales and character sketches; historical facts and information; and reminiscences of the author's boyhood and experiences as a steamboat pilot. Life on the Mississippi, in its composition and substance, is intricately related to The Adventures of Huckleberry Finn. In his introduction, James M. Cox suggests that in writing this travelogue Twain discovered the truths that form the heart of the odyssey depicted in his masterpiece, Huckleberry Finn.

Mark Twain was born Samuel Langhorne Clemens in Florida, Missouri, in 1835, and died at Redding, Connecticut in 1910. In his person and in his pursuits he was a man of extraordinary contrasts. Although he left school at twelve when his father died, he was eventually awarded honorary degrees from Yale University, the University of Missouri, and Oxford University. His career encompassed such varied occupations as printer, Mississippi riverboat pilot, journalist, travel writer, and publisher. He made fortunes from his writing but toward the end of his life he had to resort to lecture tours to pay his debts. He was hot-tempered, profane, and sentimental—and also pessimistic, cynical, and tortured by self-doubt. His nostalgia helped produce some of his best books. He lives in American letters as a great artist, the writer whom William Dean Howells called “the Lincoln of our literature.”