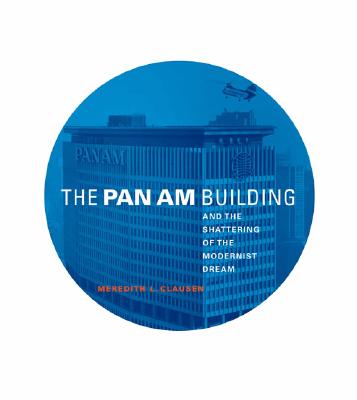 By Meredith L. Clausen
Email or call for price
Out of Print

The Pan Am Building and the reaction to it signaled the end of an era. Begun when the modernist aesthetic and the architectural star system ruled architectural theory and practice, the completed building became a symbol of modernism's fall from grace. In The Pan Am Building and the Shattering of the Modernist Dream, Meredith Clausen tells the story as both history and cautionary tale -- a case study of how not to plan and execute a large-scale urban project that seems especially relevant in light of the World Trade Center and the ongoing discussions over what should be built in its place.The Pan Am Building was despised by many as soon as the plans were announced in 1958. The star power of the celebrity architects -- those deans of modernism, Walter Gropius and Pietro Belluschi -- overrode critics' objections. When construction was completed in 1963, it became more than an architectural question; this "mute, massive, overscaled octagonal slab," as Clausen describes it, built over Grand Central Terminal, blocked the view down Park Avenue, created deep shadows where there had been sunlight, and poured 25,000 office workers on the sidewalks each morning and evening. As Clausen tells it, the story of the building -- which was undistinguished architecturally but important because of its location and its moment in history -- encompasses the end of modernism's social idealism, the decline of Gropius's and Belluschi's reputations, the victory of private interests over public good, the revival of architectural criticism in the press (both Ada Louise Huxtable and Jane Jacobs emerged as prominent and influential critics), the birth of the historic preservation movement, and the changing culture and politics of New York City.

Elzbieta (Elka) T. Kazmierczak, born in Poland, designer, illustrator, semiotician, and a printmaker. Head of theIllustration Program at SUNY at Buffalo, Co-chair of theExpert Group for Knowledge Presentation of the InternationalInstitute for Information Design. She obtainedan MFA in graphic design and an MA in Art Educationfrom the University of Illinois at Urbana-Champaign.Kazmierczak received her undergraduate degree ingraphic design, as well as formal training in philosophyand logical semiotics in Poland. Her current research isin the cognitive aspects of representation, diagrammaticmodeling, and visual literacy. Her publications include: "A Semiotic Perspective on Aesthetic Preferences: VisualLiteracy and Information Design," Information DesignJournal 10:2 (2001): 176--187; "Iconicity, Diagrammatics, and Aesthetic Preferences: A Semiotic Perspective onVisual Literacy and Information Design," Visual Sociology, The Journal of the International Visual SociologyAssociation 16:1 (2001): 89--99; "Shortcuts to Meaning: Diagrams and Making Sense Out of Image-text Designs,"Semiotics 2000 (Peter Lang Publishing): 142--159.