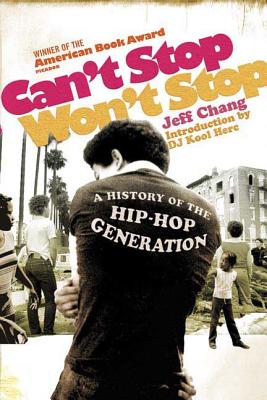 Can't Stop Won't Stop is a powerful cultural and social history of the end of the American century, and a provocative look into the new world that the hip-hop generation created.

Forged in the fires of the Bronx and Kingston, Jamaica, hip-hop became the Esperanto of youth rebellion and a generation-defining movement. In a post-civil rights era defined by deindustrialization and globalization, hip-hop crystallized a multiracial, polycultural generation's worldview, and transformed American politics and culture. But that epic story has never been told with this kind of breadth, insight, and style.

Based on original interviews with DJs, b-boys, rappers, graffiti writers, activists, and gang members, with unforgettable portraits of many of hip-hop's forebears, founders, and mavericks, including DJ Kool Herc, Afrika Bambaataa, Chuck D, and Ice Cube, Can't Stop Won't Stop chronicles the events, the ideas, the music, and the art that marked the hip-hop generation's rise from the ashes of the 60's into the new millennium.

Jeff Chang has been a hip-hop journalist for more than a decade and has written for The San Francisco Chronicle, The Village Voice, Vibe, The Nation, URB, Rap Pages, Spin, and Mother Jones. He is the author of several books, including the American Book Award-winning Can't Stop Won't Stop: A History of the Hip-Hop Generation. He was a founding editor of Colorlines Magazine, senior editor at Russell Simmons’s 360hiphop.com, and cofounder of the influential hip-hip label SoleSides, now Quannum Projects. He lives in California.

“The birth of hip-hop out of the ruin of the South Bronx is a story that has been told many times, but never with the cinematic scope and the analytic force that Jeff Chang brings to it. . . . This is one of the most urgent and passionate histories of popular music ever written.” —The New Yorker

“This is a book that should be on the shelves of every high school and college library, an engaging and entertaining full-blown excursion into American inner-city culture's rapid proliferation into every nook and cranny of culture at large.” —Los Angeles Weekly

“When Hip-Hop 101 becomes a requirement, Jeff Chang's history of the turmoil that begat this beloved culture will be the go-to textbook.” —Vibe magazine

“The most important new genre of the last quarter century finally has a sweeping historical overview as powerful as the music with Can't Stop Won't Stop . . . the best-argued, most thoroughly researched case for hip-hop as a complete and truly American culture.” —Chicago Sun-Times

“Jeff Chang's new and necessary book . . . delivers a vivid account of the last third of the American twentieth century. . . . The book is as much a cultural history as a music history.” —The Atlanta Journal-Constitution

“His scope is operatic, sprawling, and concerns itself with the people, places, and politics that drove hip-hop from its infancy. . . . It is essentially a people's history . . . perhaps Jeff Chang is hip-hop America's Howard Zinn.” —Salon.com
“Flow without the ego, intellectualism without Ivory Tower disdain, and, finally, history with heart and passion and fire: Jeff Chang's Can't Stop Won't Stop manages to go from wide-lens overview to pinpoint accuracy in covering the biggest cultural-political movement of our time. A true accomplishment.” —Farai Chideya, author of Trust and The Color of Our Future

“Jeff Chang is a master alchemist, spinning narrative gold from a weave of sociology, history, political theory, and old fashioned boom-bap. . .Can't Stop Won't Stop is one of the best books yet written on the shifting, tumultuous history of hip-hop culture and the generation of adherents it spat onto the American and global landscape. It is a tour-de-force.” —Selwyn Seyfu Hinds, author of Gunshots In My Cook-Up: Bits of Hip-Hop Caribbean Life

“An exuberant and revelatory history of the inner-city cultural revolution that still rocks the world. Jeff Chang is hip-hop's John Reed.” —Mike Davis, author of City of Quartz and Planet of Slums

“One of our most insightful commentators on urban music takes a panoramic survey of hip-hop's entirety. . .Authoritative, incisive, and entertaining, Can't Stop Won't Stop is a massive achievement.” —Simon Reynolds, author of Rip It Up And Start Again: Postpunk 1978-84 and Generation Ecstasy

“Don't be misled; this is not just another rap book. . .inflammatory, illuminating, and anything but myopic, the scope of Chang's work is awe-inspiring.” —DJ Shadow, hip-hop artist, Endtroducing and The Private Press

“This book belongs on your shelf next to Criminal Minded, Illmatic and All Eyez On Me.” —William Jelani Cobb, PhD, author of To The Break of Dawn: A Freestyle on the Hip Hop Aesthetic

“Jeff Chang backspins the un-interrogated truisms that plague so much hip hop scholarship. . .Can't Stop Won't Stop is a fluid, incisive analysis built from the ground up, with plenty of funky breakdowns.” —Adam Mansbach, author of Angry White Boy and Shackling Water

“Has any scholar ever loved hip hop so well--and taken it as seriously--as Jeff Chang does in Can't Stop Won't Stop?” —Bill Adler, author of Tougher Than Leather

“From the intellectual roots of Black cultural and political movements to the emergence of hip-hop activism,Can't Stop Won't Stop is the most comprehensive book out on hip-hop.” —Henry Chalfant, co-producer Style Wars, co-author of Subway Art and Spraycan Art

“Can't Stop Won't Stop brings us so much closer to fully understanding the complexities that inspired the Hip-Hop Generation.” —Mark Anthony Neal, author of Songs in the Key of Black Life: A Rhythm and Blues Nation

“Jeff Chang has created a new rhythm in hip-hop writing. A must-read and an instant classic.” —B+ (Brian Cross), photographer, producer/director of Keepintime, and author of It's Not About A Salary