The Loft Generation: From the de Koonings to Twombly: Portraits and Sketches, 1942-2011 (Hardcover) 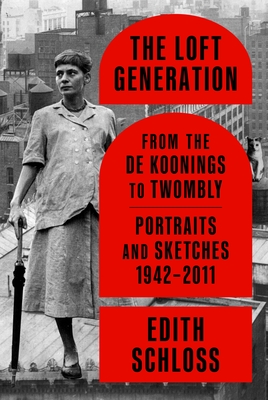 A bristling and brilliant memoir of the mid-twentieth-century New York School of painters and their times by the renowned artist and critic Edith Schloss, who, from the early years, was a member of the group that shifted the center of the art world from Paris to New York

The Loft Generation: From the de Koonings to Twombly; Portraits and Sketches, 1942–2011 is an invaluable account by an artist at the center of a landmark era in American art. Edith Schloss writes about the painters, poets, and musicians who were part of the postwar movements and about her life as an artist in New York and later in Italy, where she continued to paint and write until her death in 2011.

Schloss was born in Germany and moved to New York City during World War II. She became part of a thriving community of artists and intellectuals that included Elaine and Willem de Kooning, Larry Rivers, John Cage, and Frank O’Hara. She married the photographer and filmmaker Rudy Burckhardt. She was both a working artist and an incisive critic, and was a candid and gimlet-eyed witness of the close-knit community that was redefining the world of art. In Italy she spent time with Giorgio Morandi, Cy Twombly, Meret Oppenheim, and Francesca Woodman.

In The Loft Generation, Schloss creates a rare and irreplaceable up-close record of an era of artistic innovation and the colorful characters who made it happen. There is no other book like it. Her canny observations are indispensable reading for all critics and researchers of this vital period in American art.

Edith Schloss (1919–2011) was an observant member of the abstract expressionist movement and the New York School. She created paintings, assemblages, collages, watercolors, and drawings and worked as an art critic and writer until her death. Her paintings were shown in galleries all over the world and are in many prominent collections, and her writing has appeared in ARTNews, the International Herald Tribune, Art in America, and many other publications.

Mary Venturini was Edith Schloss’s editor for more than twenty years at Wanted in Rome, a magazine for expats in Rome that she cofounded in 1985.

"A glowing jewel of a book . . . All five senses are shaken awake . . . There is sight, of course, with color insets of Schloss’s bright and optimistic daubings alongside work by her more dour-seeming contemporaries. There is sound, in her recounting of the unholy clamor of the Chelsea neighborhood where she and Burckhardt shacked up . . . [The Loft Generation] is a book that feels manifestly present, clear and alive even while describing the past.” —Alexandra Jacobs, The New York Times

“Rarely does a writer describe artists’ lives with the exciting voyeurism of celebrities tied together in a web of sex and booze, while also insightfully commenting on their process, output, and legacy—Schloss manages to do both. . . . [Schloss] celebrates the audacity of the young without sentimentality . . . The reminiscences are not all sweet, but they are bold and stirring, much like the school of art that Schloss knew so intimately.” —Max Holleran, The New Republic

“Weaves an intricate micro-history of an unprecedentedly energized and interconnected artistic community . . . The selections in [The Loft Generation] are restless in both form and content, migrating from urban history, art monograph, and elegy to the more traditional narrative and psychological territories of memoir . . . The Loft Generation is fast-paced and deeply funny . . . tossing the reader into the postwar mêlée of a rapidly shapeshifting New York.” —Jamie Hood, Vulture

“A gripping story about a group of young artists, many of them immigrants like Schloss, who reshaped contemporary art and in the process made New York the center of the art world . . . [The Loft Generation's] pleasures, of which there are many, lie in the intimate details.” —Andy Grundberg, The American Scholar

"Schloss is enamored by the minutiae of her subjects, and the exactness and delicacy of her details ripple out like water. Trying to focus on one aspect of the book would be to let the entire thing go . . .What Schloss understood in her writing is that the miracle of art is not the thing itself, but the practice.” —Irene Lee, The Rumpus

“Rich in granular detail and rendered in eloquent and captivating prose, [The Loft Generation] is an intimate look at a pivotal era in its formative stages and offers an invaluable source for the study of one of the great art movements.” —Publishers Weekly (Starred review)

"Shrewdly observant, Schloss conveys in painterly prose the spirited individuals whose lives she shared and the worlds they inhabited . . . A captivating memoir of a life in art." —Kirkus Reviews (Starred Review)

“If you are even remotely interested in the idea of what it is to make a life from your art, Edith Schloss’s diaristic account of New York City’s post-war bohemia is indispensable reading . . . [The Loft Generation] is remarkable and engrossing.” —Jonny Diamond, LitHub

"I am tempted to say Edith Schloss’s Loft Generation is remarkable, but remarkable seems inadequate to describe it. Schloss’s memoir of life in New York during the heyday of the Abstract Expressionist movement and her subsequent expat years in Italy is wise, witty, and wild in equal measures. Writing from the position of the ultimate insider about a world that we are only beginning to understand and fully appreciate, she introduces readers to the artists and writers and composers who became part of her life – Willem and Elaine de Kooning, Rudy Burckhardt, Edwin Denby, Paul and Jane Bowles, John Cage, Frank O’Hara, among many, many others. And she describes the romance that is the life of the artist, despite poverty, monstrous political and social turmoil, and changing artistic fortunes. By the end of her story, which is so intimate and so true, we are left feeling as though we are part of that world, too. Quite simply, Schloss transports us, and that is the most any writer can hope to do. No, remarkable does not begin to describe her memoir. The Loft Generation is superb." —Mary Gabriel, author of Ninth Street Women, Lee Krasner, Elaine de Kooning, Grace Hartigan, Joan Mitchell, and Helen Frankenthaler: Five Painters and the Movement that Changed Modern Art

“This indispensable eyewitnessing of a crucial period in American culture is wonderfully alive, entertaining, and beautifully written, with a dazzling mix of the personal and the aesthetic. Warmly honest, perceptive, and humane, Edith Schloss’s memoir is itself a work of art.” —Phillip Lopate, author of The Art of the Personal Essay