By the People: Rebuilding Liberty Without Permission (Paperback) 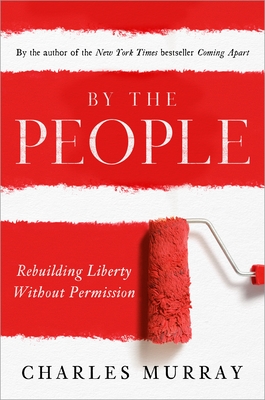 By Charles Murray
Email or call for price
Special Order

The American way of life, built on individual liberty and limited government, is on life support.

American freedom is being gutted. Whether we are trying to run a business, practice a vocation, raise our families, cooperate with our neighbors, or follow our religious beliefs, we run afoul of the government—not because we are doing anything wrong but because the government has decided it knows better. When we object, that government can and does tell us, “Try to fight this, and we’ll ruin you.”

In this provocative book, acclaimed social scientist and bestselling author Charles Murray shows us why we can no longer hope to roll back the power of the federal government through the normal political process. The Constitution is broken in ways that cannot be fixed even by a sympathetic Supreme Court. Our legal system is increasingly lawless, unmoored from traditional ideas of “the rule of law.” The legislative process has become systemically corrupt no matter which party is in control.

But there’s good news beyond the Beltway. Technology is siphoning power from sclerotic government agencies and putting it in the hands of individuals and communities. The rediversification of American culture is making local freedom attractive to liberals as well as conservatives. People across the political spectrum are increasingly alienated from a regulatory state that nakedly serves its own interests rather than those of ordinary Americans.

The even better news is that federal government has a fatal weakness: It can get away with its thousands of laws and regulations only if the overwhelming majority of Americans voluntarily comply with them. Murray describes how civil disobedience backstopped by legal defense funds can make large portions of the 180,000-page Federal Code of Regulations unenforceable, through a targeted program that identifies regulations that arbitrarily and capriciously tell us what to do. Americans have it within their power to make the federal government an insurable hazard like hurricanes and floods, leaving us once again free to live our lives as we see fit.

By the People’s hopeful message is that rebuilding our traditional freedoms does not require electing a right-thinking Congress or president, nor does it require five right-thinking justices on the Supreme Court. It can be done by we the people, using America’s unique civil society to put government back in its proper box.

Charles Murray is the W. H. Brady Scholar at the American Enterprise Institute. He came to national attention first in 1984 with Losing Ground and most recently in 2012 with Coming Apart. He lives with his wife in Burkittsville, Maryland.

"By the People is a study in contradictions. It is simultaneously depressing and inspiring, technical and profound, infuriating and charming, but always compelling. Charles Murray plays the role of a liberty-loving Lenin asking the question, 'What is to be done?' To this end, he offers a practical guide to repairing our broken constitutional order. It is that rarest of books: a populist manifesto grounded in fact and logic." --Jonah Goldberg

"A road map to recapture true American exceptionalism. With passion, brilliance, and a keen sense of the radical essence of what America means, Murray dismisses what passes for political debate today and offers an audacious plan to restore the liberty our founders bequeathed to us." -- Edward Crane, president emeritus, Cato Institute

"Liberty without permission? Selective civil disobedience? I'm in! At first I balked, but Murray makes a convincing case that a Madison Fund might scrape away the sclerosis of the suffocating state. As usual, his original arguments expand the way I think. When law is so complex that it's indistinguishable from lawlessness, when the tax code is 4 million words long, something like systematic disobedience is badly needed." --John Stossel