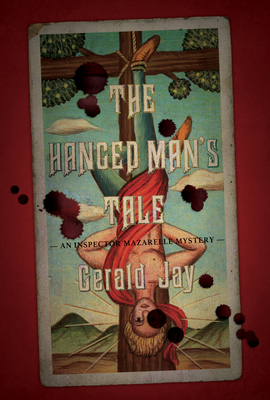 In the shadowy back alleys and opulent homes of Paris, hard-nosed police inspector Paul Mazarelle of The Paris Directive sets out on the trail of a serial killer.

A murdered man is discovered dangling inside the tunnels of a Paris canal--the only clue, the tarot card in his pockets: the Hanged Man. When an innocent suspect is railroaded into prison for the homicide, Mazarelle sets off on the hunt for the real killer.

For the charming, hot-tempered, impulsive Frenchman--now back from the provinces and leading his own homicide unit out of Paris’s famed Quai des Orfevres--it’s an investigation that takes him far from the comforts of Beaujolais and bouillabaisse, and plunges him into an underworld of ruthless white supremacists looking for scapegoats in Paris’s growing immigrant community, corrupt cops eager to cover up a shady side business, and a conspiracy of secrets that threaten his own life.

Meanwhile, Claire Girard, an irresistible and ambitious journalist at a popular tabloid, is wrapped up in the same story. On the trail of the Tarot Card killer, Mazarelle finds himself blindsided by their growing attraction. And when his team’s case collides with Girard's latest scoop, and the body count keeps rising, Mazarelle himself becomes a prime suspect who must clear his own name. Gerald Jay’s latest Mazarelle adventure is a riveting, fast-paced thriller about a classic French detective making his way through the dangerous streets of a very modern world.

GERALD JAY is the nom de plume of novelist Gerald Jay Goldberg, writing here in collaboration with his family, Robert Goldberg, James Goldberg, and Nancy Marmer. A new Mazarelle novel is in the works.

"Welcome back, Inspector Mazarelle! Jay's brilliant, brooding, gourmand is one of detective fiction's greatest creations. I didn't want it to end."
--Andy Breckman, creator of Monk

"What Philip Kerr’s Bernie Gunther is to Berlin, Gerald Jay’s Paul Mazarelle is to Paris: the world-weary cop condemned to figuring out which of his colleagues is the least trustworthy. Cinematic and suspenseful, laced with sudden turns, The Hanged Man’s Tale is a gripping read -- a classic roman policier set in the thoroughly modern streets of Paris. You can taste the espresso in the cafes, and feel the danger lurking in the shadows."
--Alexander Wolff, author of Endpapers: A Family Story of Books, War, Escape, and Home

“The writing is taut yet still redolent of an older European style, when storybook cops talked of Turgenev novels.”
--Booklist

Praise for The Paris Directive:

“Outstanding! The Paris Directive is a beguiling, and entirely entertaining novel that promises intrigue and suspense from the very first page. Inspector Mazarelle is a wonderful creation: a  world-weary, gimlet-eyed detective who must rouse himself for one last case. I expect to see him one day in the pantheon of greats alongside Poirot, Maigret, Brunetti, and Zen.”
--Christopher Reich, author of Rules of Deception

“Jay has woven threads of police procedural, espionage, rural noir, ‘acts of barbarism,’ and Gallic charm into a story that will be a great fit for almost any crime fan. Mazarelle is a memorable flic.”
--Booklist (starred review)

“The charming, indomitable Inspector Mazarelle . . . enjoys puffing on his old pipe, stopping for cognac in the middle of the day, and dining on . . . his favorite dish, duck confit, at the Café Valon. Mystery fans will look forward to seeing more of him.”
--Publishers Weekly

“A mashup of cloak-and-dagger and cozy replete with murder and fine dining.”
—Kirkus Reviews

“This novel is many things at once—stylish, dark, humorous, suspenseful—but mostly very readable . . . This is a rich, deep novel that will leave you wanting more.”
--Mystery Scene

“Gerald Jay is truly a master in elegant use of language and a bright star in the world of crime fiction.”
--Mystery Tribune

“This is pretty close to mystery nirvana: a sophisticated book set in France, populated by interesting characters, with descriptions of good food.”
--Murder by the Book

“A vastly entertaining read . . . Klaus Reiner is one of the most interesting villains I’ve become acquainted with recently, a chillingly attractive blend of ego, intelligence, and psychopathy.”
--Kittling Books

“A sleek, elegantly plotted thriller that deftly brings the world of international espionage into the rural backwaters of southwest France.”
--Longitude Books

“This novel has everything! Suspense, wonderful characterization, beautiful descriptions of the French countryside and . . . edge-of-your-chair narrative . . . Anyone who is a fan of intrigue will jump on this book and read it from cover to cover.”
--Feathered Quill