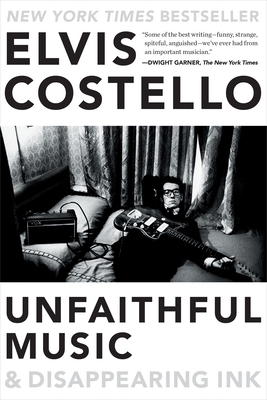 Unfaithful Music & Disappearing Ink provides readers with a master’s catalogue of a lifetime of great music. Costello reveals the process behind writing and recording legendary albums like My Aim Is True, This Year’s Model, Armed Forces, Almost Blue, Imperial Bedroom, and King of America. He tells the detailed stories, experiences, and emotions behind such beloved songs as “Alison,” “Accidents Will Happen,” “Watching the Detectives,” “Oliver’s Army,” “Welcome to the Working Week,” “Radio Radio,” “Shipbuilding,” and “Veronica,” the last of which is one of a number of songs revealed to connect to the lives of the previous generations of his family.

Costello chronicles his musical apprenticeship, a child's view of his father Ross MacManus' career on radio and in the dancehall; his own initial almost comical steps in folk clubs and cellar dive before his first sessions for Stiff Record, the formation of the Attractions, and his frenetic and ultimately notorious third U.S. tour. He takes readers behind the scenes of Top of the Pops and Saturday Night Live, and his own show, Spectacle, on which he hosted artists such as Lou Reed, Elton John, Levon Helm, Jesse Winchester, Bruce Springsteen, and President Bill Clinton.

The idiosyncratic memoir of a singular man, Unfaithful Music & Disappearing Ink is destined to be a classic.

Elvis Costello is a Grammy award-winning musician whose career spans almost four decades. A prolific singer-songwriter, Costello has released several critically-acclaimed albums, and in 2003 was inducted into the Rock and Roll Hall of Fame.

"Some of the best writing – funny, strange, spiteful, anguished – we’ve ever had from an important musician.” –Dwight Garner, The New York Times

“The book is fantastic - maybe the best about music by a musician that I've read.... The stuff about the collaborations alone - McCartney, Burt Bacharach, Allen Toussaint, the Roots, the Brodsky Quartet  - is riveting.” –Nick Hornby

“In a world littered with uneven (and largely ghosted) celebrity memoirs, “Disappearing Ink” is a beautifully written revelation. Dare I blaspheme by declaring I liked it even more than the excellent memoirs produced by Bob Dylan and Keith Richards? Costello embraces the basic qualities of good storytelling: the use of detail, tension and humor....The book is also a gold mine for Costello obsessives who have spent decades dissecting and analyzing his every lyrical zinger. But it’s not just for fans, more “Angela’s Ashes” than Motley Crue’s “The Dirt.” “Unfaithful Music” is a lyrical tale that stretches across generations, geography and a century of popular song. The book serves as both a musical and personal anthropology.“ –Geoff Edgers, The Washington Post

”[Unfaithful Music & Disappearing Ink] is refreshingly free of salacious gossip and needless name-dropping; it's an intelligent self-assessment from a musician who went from angry young man to elder statesman of pop… It's an unexpected memoir from a musician whose creativity and brilliance changed pop rock forever.” —Michael Schaub, NPR

“A winningly droll and good-natured guide to his life and many works throughout.” –Entertainment Weekly

"Just like his music, Unfaithful Music constantly defies expectations and the simple pleasures of faraway days. Written in a clipped, biting style, the book reads like Costello's greatest songs, equally lyrical and hard to pin down. It's a constantly illuminating, perpetually idiosyncratic read, fitting for a musician whose entire life has been one long reinvention…. For 670 brilliant pages, we're allowed to tag along with one of the greats, witnessing the unchanging beauty of a man who refuses to settle down on his quest of musical self-exploration—and we're all better off for it. " –Chicago Reader

“Vivid….It's not surprising that one of rock's most literate songwriters would pen such a deep, free-form memoir.” –Houston Chronicle

“Elvis Costello delivers an impeccably detailed autobiography. He’s often as brilliant at turning a phrase in prose as he is in his lyrics.” –Paste Magazine

“Enthralling…. This is family history as musical encyclopedia, and to listen to Costello recount his life is to be buttonholed by an enthusiastic fan. Fandom for Costello is inseparable from the compulsion to write songs and, it seems, to understand his own life…. Fortunately for the fan of Costello’s music the topic of discussion is often his own songs, and he is, unsurprisingly, a witty and eloquent guide.” —Paul Grimstad, New Republic

“Long one of music's wittiest, smartest, and most perceptive lyricists, Costello has done his legacy proud with his new book, which, thankfully, goes far beyond his angry-young-man days, most movingly in its frequent reminiscences about the relationship between the singer and his musician father.” —New York Magazine

“The story unfolds like a movie that jumps across time, more thematic than chronological, as boyhood anecdotes and obsessions intersect with mature songs and adult reckoning…. The book doubles as a selective mini-history of 20th century music, as told by a discerning guide. He addresses artists both towering (Bob Dylan, Joni Mitchell, Johnny Cash) and relatively unheralded (David Ackles, Robert Wyatt) with a fan's affection and music scholar's insight.” –Greg Kot, Chicago Tribune

"With an encyclopedic knowledge and appreciation for, and deep love of, music, and with an expressive power and heart, Costello’s memoir will take its place in the highest echelons of the genre." --Library Journal (starred review)

“This is a big book, literally, by one of the best rockers in the business. Given the singular, and eclectic, nature of his career, it is no surprise that Elvis Costello’s anecdotal autobiography is an idiosyncratic journey through his music and the people and places that have inspired him…A must for Costello fans everywhere.” --Booklist (starred review)

“Costello’s prose cuts with the same spiky wit and observational power as his well-known lyrics…packed with great lines, vivid anecdotes…a treat for his many fans.” —Kirkus Reviews

“Plenty of tales to keep the pages turning. Readers will be fascinated by Costello’s stories…his book feels like a discussion between friends over a pint.” —Publishers Weekly

"Costello is one the greatest writers of the 20th Century. It's funny, observant and clear of purpose." --Times

"Every page exudes his deep love and knowledge of modern music." --The Guardian

"His witty, word-playing voice transmits loud and clear....there are smart snapshots of vanished worlds...all his sins and virtues are displayed in this stylish, astute book." Victoria Segal, Sunday Times

"A truly weighty rock memoir ... There's plenty of insight into his art here, a smattering of gossip, a wealth of pop-cultural knowledge, and just enough self-flagellation to keep things interesting." --NME

"One of the finest musical biographies I have ever read ... an engrossing and rewarding read." Keith Bruce, The Herald