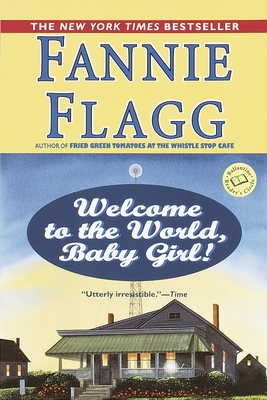 This is book number 1 in the Elmwood Springs series.

Welcome to the World, Baby Girl! is the funny, serious, and compelling new novel by Fannie Flagg, author of the beloved Fried Green Tomatoes at the Whistle Stop Cafe (and prize-winning co-writer of the classic movie).

Once again, Flagg's humor and respect and affection for her characters shine forth. Many inhabit small-town or suburban America. But this time, her heroine is urban: a brainy, beautiful, and ambitious rising star of 1970s television. Dena Nordstrom, pride of the network, is a woman whose future is full of promise, her present rich with complications, and her past marked by mystery.

Fannie Flagg began writing and producing television specials at age nineteen and went on to distinguish herself as an actress and writer in television, films, and the theater. Her first novel, Daisy Fay and the Miracle Man, spent ten weeks on The New York Times paperback bestseller list, and her second novel, Fried Green Tomatoes at the Whistle Stop Cafe , spent thirty-six weeks on the same list. It was produced by Universal Pictures as the feature film  Fried Green Tomatoes. Flagg's script was nominated for both the Academy and Writers Guild of America awards, and won the highly regarded Scripters Award. Flagg narrated both novels on audiotape and received a Grammy Award nomination for best spoken word. Flagg lives in Montecito, California.

"SATISFYING . . . [FLAGG'S] FAITH IN THE HEALING POWER OF SMALL TOWNS AND FAMILY ARE REFRESHING."
--People