How to Build Stonehenge (Hardcover) 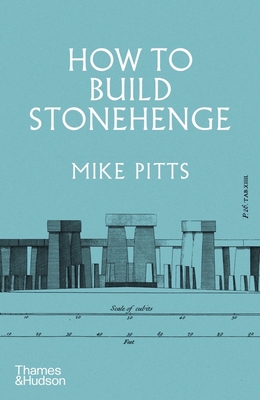 Drawing on a lifetime’s study and a decade of new research, archaeologist Mike Pitts explores the mystery of how Stonehenge was built.

There is nothing like Stonehenge: the simple, graphic genius of these great, arranged blocks. The stones seem to rise from the ground in some antediluvian heave of the Earth: lintels, great horizontal slabs, roughly squared, the grey rock now covered in subtle lichen green. But who made it? When did they make it? And most importantly, how was it built?

How it was constructed is perhaps the central question about Stonehenge and likely the most common query from its many visitors. Yet it’s one of the least-researched aspects of the site, which author Mike Pitts aims to correct in this new book. With a unique focus on the monument itself, How to Build Stonehenge describes the site as it is today, what we know about the different types of stone, how they were carved and positioned to create the ultimate in megalithic architecture, and how this was taken down and left to ruin until the decay was arrested in the twentieth century with substantial restoration works.

Pitts then examines the latest research on the site, interrogating the key questions: the sources of the various stones, how they were transported, and how it was all put together. The book considers the first significant study of sarsen, the stone most of Stonehenge is made of, in detail. Recent groundbreaking discoveries using cutting-edge scientific techniques have given us incredible new detail on the sources of these immense stones and brings it into the wider context of other megalith buildings around the world, as well as placing Stonehenge at the center of a network of European Bronze Age cultures.

Mike Pitts is the author of Digging up Britain, Digging for Richard III, and Hengeworld. He is the editor of British Archaeology magazine and is a trained archaeologist with firsthand experience digging at Stonehenge. He has presented at countless events and talks at Stonehenge.