The Substitution Order: A novel (Paperback) 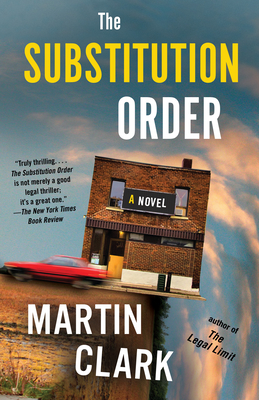 Kevin Moore, once a high-flying Virginia attorney, hits rock bottom after a tumultuous summer leaves him disbarred and separated from his wife. Short on cash and looking for work, he lands in the middle of nowhere with a job at SUBstitution, the world’s saddest sandwich shop. His closest confidants: a rambunctious rescue puppy and the twenty-year-old computer whiz manning the restaurant counter beside him.

Kevin’s determined to set his life right again, but the troubles keep coming, including a visit from a mysterious stranger who wanders into the shop armed with a threatening “invitation” to join a multimillion-dollar scam. Before long, Kevin will need every bit of his legal savvy just to stay out of prison.

In The Substitution Order, Martin Clark—hailed by Entertainment Weekly as “hands down our best legal-thriller writer”—takes readers on a remarkable tour of the law’s tricks and hidden trapdoors and delivers a wildly entertaining novel that will keep you guessing and rooting for its tenacious hero until the very last page.

“Truly thrilling. . . . The Substitution Order is not merely a good legal thriller; it’s a great one.” —The New York Times

“Clark’s trademark witty prose and mind-bending legal plotting get a welcome workout in this engaging thriller.” —The Seattle Review of Books

“Tightly woven. . . . Martin Clark proves how adept he is at writing the contemporary legal thriller. . . . The best book so far from one of the South’s best-kept secrets.” —The Anniston Star

“Tightly plotted. . . . In The Substitution Order, Martin Clark—often acclaimed as the country’s best writer of legal thrillers—tells the tale of Kevin Moore. Clark writes crisply about encounters among people, and sharply of the shortcomings of the legal and health care systems. There’s plenty here to engage.”  —The Washington Times

“Martin Clark, retired judge and master of colorful legal thrillers, is back with another page turner. Clark’s narrator is smart and observant, and the reader is in good hands throughout the quickly moving plot.” —Book City Roanoke

“Clark has created likable and adaptable protagonists. . . . How they turn a doomed situation around is ingenious and unexpected.” —Bookreporter

“An enjoyable read. As . . . thrillers go, this one is a cut above most of them. Clark writes very well, and the reader will keep turning pages to find out what will happen next.” —The Decatur Daily