The Walrus Was Paul: The Great Beatle Death Clues (Paperback) 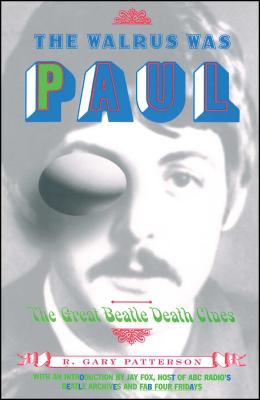 It was the late 1960s, the Beatles hadn’t toured since 1966, and some truly bizarre indications began appearing, pointing to the unthinkable: Paul McCartney had been killed in a car accident and replaced by a look-alike. The Walrus Was Paul unearths every single clue from one of rock ’n’ roll’s most enduring puzzles and takes you on a magical mystery tour of baffling, yet fascinating, hints for solving this mystery.

Test your “Paul is dead” trivia knowledge. Did you find and answer the following clues on the front cover?

To what song does the title, The Walrus Was Paul, refer?
-“I Am the Walrus,” which appeared on the clue-filled album Magical Mystery Tour.

There is an egg in Paul’s eye. Why?
-In the song “I Am the Walrus,” John Lennon sings, “I am the eggman...I am the walrus”—and later, in the song “Glass Onion,” we find out that, in fact, “the walrus was Paul.”

To what album (and richest source of “Paul is dead” clues) do the red, Victorian-style design elements on the front refer?
-Sgt. Pepper's Lonely Hearts Club Band

Why is the image of Paul McCartney on the cover blurry? Are there distinguishing characteristics that might lead you to conclude something is awry?
-Many photographs of Paul in these questionable years were blurry, and Paul had a mustache, which allegedly concealed the fact that this was not Paul and the plastic-surgery scars were being hidden from his curious public.

The anagram on the bottom of the cover refers to a Greek island where John Lennon had what planned?
-The island Leso is the “hidden Greek island” on which John Lennon planned to bury Paul, and it is spelled out as “Be at Leso” on the cover of Sgt. Pepper's Lonely Hearts Club Band.

Jay Fox ABC Fab Four Fridays A must read for any fan of the Fab Four.