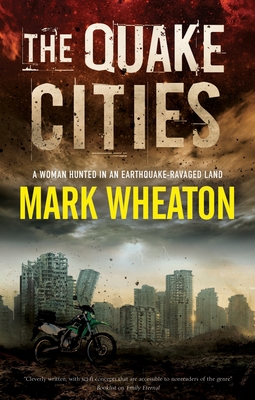 A woman tries to find her way home in a world decimated by earthquakes, but there are people determined to stop her and harvest her DNA. Alice wakes up in the Los Angeles Quake Zone in 2025 having no idea how she got there. As her memories slowly return, she finds she's being hunted by several armed groups intent on capturing her alive. At the same time, Este, a survivor of the quakes that destroyed Los Angeles, makes a living as a pathfinder for salvage teams in the city. Este rescues Alice from her pursuers and learns there is something not quite right about her - Alice is convinced it is 2003. Aided by Este's occasional boyfriend Wilfredo and her dog Casey, Este and Alice try to evade those chasing Alice and discover why they value her so highly, all while trying to reunite her with her family as the earthquakes around the world grow worse.

Starting out working in a computer factory, Mark Wheaton took his first steps into writing as a journalist for movie magazines such as Total Film and SFX. Since then he has written for video games, comic books, HBO, Sony and the Disney Channel, and worked with filmmakers such as Sam Raimi and Michael Bay. He is the author of Fields of Wrath, City of Strangers and Wages of Sin, and of Emily Eternal under the pseudonym M.G. Wheaton. www.mark-wheaton.com