New Women in the Old West: From Settlers to Suffragists, an Untold American Story (Hardcover) 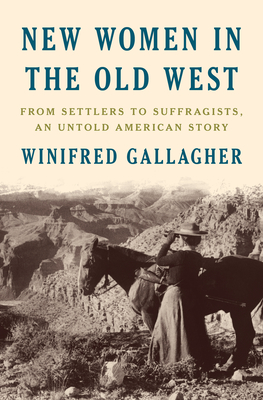 A riveting history of the American West told for the first time through the pioneering women who used the challenges of migration and settlement as opportunities to advocate for their rights, and transformed the country in the process

Between 1840 and 1910, hundreds of thousands of men and women traveled deep into the underdeveloped American West, lured by the prospect of adventure and opportunity, and galvanized by the spirit of Manifest Destiny. Alongside this rapid expansion of the United States, a second, overlapping social shift was taking place: survival in a settler society busy building itself from scratch required two equally hardworking partners, compelling women to compromise eastern sensibilities and take on some of the same responsibilities as their husbands. At a time when women had very few legal or economic--much less political--rights, these women soon proved they were just as essential as men to westward expansion. Their efforts to attain equality by acting as men's equals paid off, and well before the Nineteenth Amendment, they became the first American women to vote.

During the mid-nineteenth century, the fight for women's suffrage was radical indeed. But as the traditional domestic model of womanhood shifted to one that included public service, the women of the West were becoming not only coproviders for their families but also town mothers who established schools, churches, and philanthropies. At a time of few economic opportunities elsewhere, they claimed their own homesteads and graduated from new, free coeducational colleges that provided career alternatives to marriage. In 1869, the men of the Wyoming Territory gave women the right to vote--partly to persuade more of them to move west--but with this victory in hand, western suffragists fought relentlessly until the rest of the region followed suit. By 1914 most western women could vote--a right still denied to women in every eastern state.

In New Women in the Old West, Winifred Gallagher brings to life the riveting history of the little-known women--the White, Black, and Asian settlers, and the Native Americans and Hispanics they displaced--who played monumental roles in one of America's most transformative periods. Like western history in general, the record of women's crucial place at the intersection of settlement and suffrage has long been overlooked. Drawing on an extraordinary collection of research, Gallagher weaves together the striking legacy of the persistent individuals who not only created homes on weather-wracked prairies and built communities in muddy mining camps, but also played a vital, unrecognized role in the women's rights movement and forever redefined the "American woman."

Winifred Gallagher’s books include How the Post Office Created America, House Thinking, Just the Way You Are (a New York Times Notable Book), Working on God, The Power of Place, Rapt: Attention and the Focused Life, and New: Understanding Our Need for Novelty and Change. She has written for numerous publications, such as The Atlantic Monthly, Rolling Stone, and The New York Times. She lives in upstate New York.

“New Women in the Old West is really two books deftly stitched together. It is a brisk history of the galvanizing role played by Western women in the national struggle for suffrage. It is also a kind of group portrait of the independent, resourceful women who managed to forge places for themselves in a man’s world . . . A testament to the depth of Ms. Gallagher’s research is the range of her cast of characters. It includes Native American, black and Hispanic women as well as Asians and other immigrants . . . [She] has an eye for the telling detail . . . Both informative and enjoyable to read. Its roster of the accomplished, often heroic, women of the West is inspiring.” —Wall Street Journal

“Winifred Gallagher’s comprehensive New Women in the Old West: From Settlers to Suffragists, an Untold American Story unearths this story through the lives of dozens of forgotten trailblazers. . . Gallagher’s rediscoveries are inspirational.” —BookPage

“A buoyant women’s history of the American West…Gallagher brings a fresh lens to the suffrage movement, and rescues many of her pioneering subjects from obscurity. Feminists will be heartened by this rich and satisfying history.” —Publishers Weekly

“Winifred Gallagher weaves her multi-racial and multi-ethnic cast of characters into a fascinating story of resilience, ambition, and tragedy that ranges widely across the nineteenth century West. The extraordinary women at the heart of her narrative are brave, determined, and often flawed, and she makes it clear why it is impossible to understand the West without them.” —Richard White, author of California Exposures

“Welcome to the Women's West—a fascinating mix of newcomers and old timers, adventurous souls all, equally dedicated to the region they called home and winning rights for their sex.  Their inspirational stories speak powerfully to western women's roles in the ongoing struggle for equality and justice for all Americans.” —Susan Ware, author of Why They Marched: Untold Stories of the Women Who Fought for the Right to Vote

“Employing a wonderfully engaging biographical approach, Winifred Gallagher’s New Women in the Old West tells the vitally important and complicated parallel stories of colonization and women’s empowerment in the West from the mid-nineteenth to the early-twentieth century. The cast of characters, from the legendary to the long overlooked, captures the full demographic diversity of the West and the enormous importance of that region to the course of the nation, while serving as a powerful reminder that ‘despite formidable obstacles, change is possible.’” —David Wrobel, dean of the College of Arts and Sciences at the University of Oklahoma, author of America’s West: A History, 1890-1950

“Staking her broad sweep of Western history in the bedrock of individual women's stories, Gallagher expertly chronicles their collective determination to break for freedom, equality, education, land and political power. The author incorporates Native, Hispanic, African, Asian, and Anglo-American women's experiences as she tracks the rise of women's rights—‘a jagged trajectory of advances and retreats’ that ultimately succeeds. This is an eye-opening, impressive tale of empowerment that spread from West to East and transformed the nation.” —Sherry L. Smith, author of Bohemians West: Free Love, Family and Radicals in the Twentieth Century

“A fascinating, deeply researched, long overdue book that all young women will want to read about the crucial role that women played in the development of the American West. It proves that no one individual or group changes the world alone.” —Esther Wojcicki, cofounder of Tract, founder of Palo Alto High Media Arts Program, and author of How to Raise Successful People