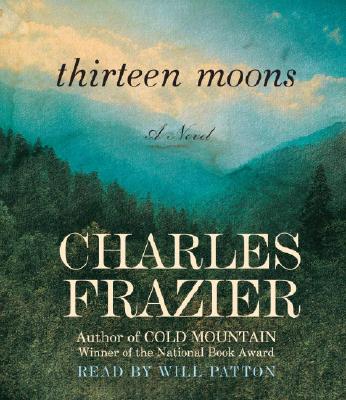 By Charles Frazier, Will Patton (Read by)
Email or call for price
Special Order

This magnificent novel by one of America’s finest writers is the epic of one man’s remarkable journey, set in nineteenth-century America against the background of a vanishing people and a rich way of life.

At the age of twelve, under the Wind moon, Will is given a horse, a key, and a map, and sent alone into the Indian Nation to run a trading post as a bound boy. It is during this time that he grows into a man, learning, as he does, of the raw power it takes to create a life, to find a home. In a card game with a white Indian named Featherstone, Will wins – for a brief moment – a mysterious girl named Claire, and his passion and desire for her spans this novel. As Will’s destiny intertwines with the fate of the Cherokee Indians – including a Cherokee Chief named Bear – he learns how to fight and survive in the face of both nature and men, and eventually, under the Corn Tassel Moon, Will begins the fight against Washington City to preserve the Cherokee’s homeland and culture. And he will come to know the truth behind his belief that “only desire trumps time.”

Brilliantly imagined, written with great power and beauty by a master of American fiction, Thirteen Moons is a stunning novel about a man’s passion for a woman, and how loss, longing and love can shape a man’s destiny over the many moons of a life.

Charles Frazier grew up in the mountains of North Carolina. Cold Mountain, his highly acclaimed first novel, was an international bestseller, and won the National Book Award in 1997. "From the Hardcover edition."

"Gorgeous…Thirteen Moons calls Cold Mountain to mind in its wonder at the natural world; its pacificist undercurrents; its dismay at the dismantling of what matters, and its convication that one love, no matter how tortured and inexplicable, can be life-defining…fascinating…vivid and alive."
–Newsweek

"Thirteen Moons brings this vanished world thrillingly to life… One of the great Native American, and American stories, and a great gift to all of us, from one of our very best writers."
–Kirkus Reviews, starred review

"There are things so masterful words can’t do them justice. Frazier’s writing falls in that category…With Thirteen Moons, he’s doing important work filling in the gaps, helping restore the roots, of our knowledge of our own history."
–Asheville Citizen-Times

"Fascinating…Reading Thirteen Moons is an intoxicating experience…This is 21st-century literary fiction at its very best."
–BookPage

"Thirteen Moons is rare in many ways and occupies a literary plane of such height that reviewing it is not really salient….Thirteen Moons has the power to inspire great performances from succeeding generations of writers….For those who simply value the literary experience, Thirteen Moons will provide the immense satisfaction of taking a literary journey of magnitude. Whether on a plane, in an office or curled in a window seat, readers who absorb Will's story will find their own lives enriched….Thirteen Moons belongs to the ages."
–Los Angeles Times

"Verdict: A powerhouse second act….a brilliant success…Frazier's second act should convince everyone that he's here to stay. It is a powerful, dramatic, often surprising and memorable novel."
–Atlanta Journal Constitution

"Thirteen Moons is a boisterous, confident novel that draws from the epic tradition... Frazier is a natural storyteller, and throughout his picaresque tale are grand themes and eulogies"
–Boston Globe

"Warm hearted…Frazier is a remarkably meticulous and tasteful writer… Thirteen Moons is a worthy successor to the first novel and a highly readable book."
–Seattle Times

"To Charles Frazier, words are playthings. Like very few other contemporary American novelists, he puts them together in such a way that they can transform an otherwise mundane moment, scene or conversation into one that is transcendent….No sophomore jinx here. Reading a Frazier novel is like listening to a fine symphony. He's a maestro whose pen is his baton, beckoning the best that each sentence has to offer. And just as you wouldn't rush a conductor, you should take the time to savor Frazier’s work, to take in each thought, to relish the turn of phrase or the imagery of a craftsman."
–Denver Post

"Two for two…Here is a book brimming with vivid, adventurous incident…Charles Frazier set himself a daunting challenge with this book. He set out to write a historical novel that was retrospective and meditative, yet still vibrant and immediate with life. Thirteen Moons succeeds in classy fashion."
–Raleigh News & Observer

"If current fiction is anything to go by, it’s hard for a novelist to make Santayana's puzzle pieces - lyricism, comedy, tragedy - fit together, as they do in real life and real history. Frazier has done it…Thirteen Moons makes you feel that change that happened so long before our own time, and makes you mourn it."
–Newsday

"Thirteen Moons is a fitting successor to Cold Mountain…fans of Frazier's debut will be cheered to discover that the new book is another compulsively readable work of historical fiction."
–St. Louis Post-Dispatch

"If there is any doubt that Frazier is an incredibly gifted storyteller - and not just a lucky name or a one-hit wonder - it will be put to rest with the publication of Thirteen Moons. Within 10 pages, this long-awaited new novel bears the reader swiftly out of the waking world into its own imagined universe like nothing else published this year."
–Minneapolis Star Tribune

"Forget the sophomore jinx. Frazier demonstrates that Cold Mountain was no one-hit wonder with this fully realized historical novel again set in the South….Again, Frazier shows himself a master of landscape and language, both often fresh and surprising in his telling."
–Seattle Post-Intelligencer

"Thirteen Moons contains achingly beautiful passages of snowfalls, fog-wrapped rivers and moonlit forests. There are ribald and hilarious events, too, including a description of the Cherokee Booger Dance that is a masterpiece of satire. The love affair between Cooper and Claire threads its way through this pseudo-historic epic like a brilliant, scarlet ribbon. There is also a melancholy refrain that celebrates a wondrous time and place that is gone and will never return."
–Smoky Mountain News

"Fiction of the highest order…Another indelible character. Charles Frazier has a knack for them."
–Charlotte Observer

"What a story!... Frazier's creation, Will Cooper, is utterly charismatic….Frazier's genius lies in his ability to convey emotions that feel pure and genuine…It was worth the wait."
–Dayton Daily News