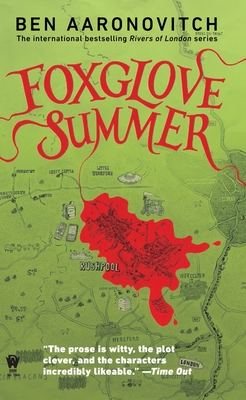 This is book number 5 in the Rivers of London series.

When two young girls go missing in rural Herefordshire, police constable and wizard-in-training Peter Grant is sent out of London to check that nothing supernatural is involved.

It’s purely routine—Nightingale, Peter’s superior, thinks he’ll be done in less than a day. But Peter’s never been one to walk away from someone in trouble, so when nothing overtly magical turns up he volunteers his services to the local police, who need all the help they can get.

But because the universe likes a joke as much as the next sadistic megalomaniac, Peter soon comes to realize that dark secrets underlie the picturesque fields and villages of the countryside and there might just be work for Britain’s most junior wizard after all.

Soon Peter’s in a vicious race against time, in a world where the boundaries between reality and fairy have never been less clear....

Ben Aaronovitch was born in London in 1964 and had the kind of dull routine childhood that drives a man either to drink or to science fiction. He is a screenwriter, with early notable success on BBC's legendary Doctor Who, for which he wrote some episodes now widely regarded as classics, and which even he is quite fond of. After a decade of such work, he decided it was time to show the world what he could really do, and embarked on his first serious original novel. The result is Midnight Riot, the debut adventure of Peter Grant. He can be contacted at his website, the-folly.com.

"This series is a constant joy to read....I’ve been looking forward all year to find out what happened next, and the book did not disappoint.” —Genevieve Cogman, author of acclaimed The Invisible Library