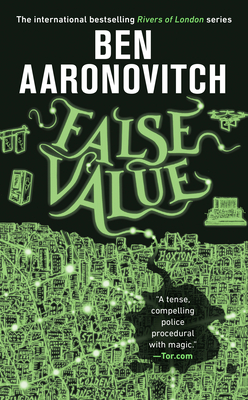 This is book number 8 in the Rivers of London series.

Now in paperback, the eighth book of the bestselling Rivers of London series returns to the adventures of Peter Grant, detective and apprentice wizard, as he solves magical crimes in the city of London.

Peter Grant is facing fatherhood, and an uncertain future, with equal amounts of panic and enthusiasm. Rather than sit around, he takes a job with émigré Silicon Valley tech genius Terrence Skinner's brand new London start up—the Serious Cybernetics Company.

Drawn into the orbit of Old Street's famous 'silicon roundabout', Peter must learn how to blend in with people who are both civilians and geekier than he is. Compared to his last job, Peter thinks it should be a doddle. But magic is not finished with Mama Grant's favourite son.

Because Terrence Skinner has a secret hidden in the bowels of the SCC. A technology that stretches back to Ada Lovelace and Charles Babbage, and forward to the future of artificial intelligence. A secret that is just as magical as it technological—and just as dangerous.

Ben Aaronovitch was born in London in 1964 and had the kind of dull routine childhood that drives a man either to drink or to science fiction. He is a screenwriter, with early notable success on BBC's legendary Doctor Who, for which he wrote some episodes now widely regarded as classics, and which even he is quite fond of. After a decade of such work, he decided it was time to show the world what he could really do, and embarked on his first serious original novel. The result is Midnight Riot, the debut adventure of Peter Grant.

"This series is a constant joy to read....I’ve been looking forward all year to find out what happened next, and the book did not disappoint.” —Genevieve Cogman, author of The Invisible Library

"As always, Ben Aaronovitch takes the reader on an unforgettable ride into the fantastic." —Starburst Magazine