Here Is Your War: Story of G.I. Joe (Paperback) 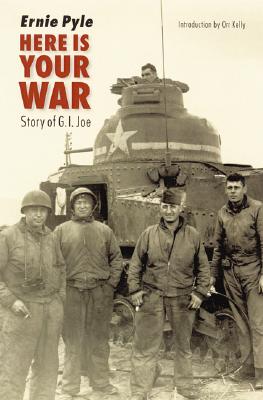 A wonderful and enduring tribute to American troops in the Second World War, Here Is Your War is Ernie Pyle’s story of the soldiers’ first campaign against the enemy in North Africa. With unequaled humanity and insight, Pyle tells how people from a cross-section of America—ranches, inner cities, small mountain farms, and college towns—learned to fight a war. The Allied campaign and ultimate victory in North Africa was built on blood, brave deeds, sacrifice and needless loss, exotic vistas, endurance, homesickness, and an unmistakable American sense of humor. It’s all here—the suspenseful landing at Oran; the risks taken daily by fighter and bomber pilots; grim, unrelenting combat in the desert and mountains of Tunisia; a ferocious tank battle that ended in defeat for the inexperienced Americans; and the final victory at Tunis. Pyle’s keen observations relate the full story of ordinary G.I.s caught up in extraordinary times.

Ernie Pyle (1900–45) was a revered war correspondent in Europe and the South Pacific during the Second World War. He is the author of Brave Men, available in a Bison Books edition. Orr Kelly is a retired veteran Washington correspondent and the author of nine books on military subjects, including Meeting the Fox: The Allied Invasion of Africa, From Operation Torch to Kasserine Pass to Victory in Tunisia and From a Dark Sky: The Story of U.S. Air Force Special Operations.

"Pyle was a keen observer, and it’s the small details about minor things that make his writing stand out. An essential piece of Americana for all collections."—Library Journal
— Library Journal

"A full-length, deeply human portrait of the American soldier in action. . . . The things that those at home want most to know."—New York Times
— New York Times