The Dull Knifes of Pine Ridge: A Lakota Odyssey (Paperback) 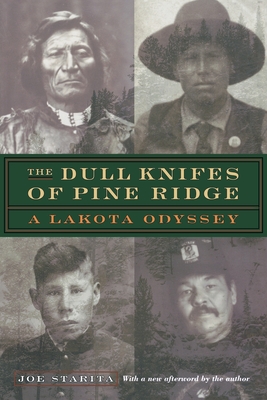 Joe Starita tells the triumphant and moving story of a Lakota-Northern Cheyenne family. In 1878, the renowned Chief Dull Knife, who fought alongside Crazy Horse, escaped from forced relocation in Indian Territory and led followers on a desperate six-hundred-mile freedom flight back to their homeland. His son, George Dull Knife survived the Wounded Knee Massacre and later toured in Buffalo Bill Cody's Wild West Show. Guy Dull Knife Sr. fought in World War I and took part in the Siege of Wounded Knee in 1973. Guy Dull Knife Jr. fought in Vietnam and is now an accomplished artist. Starita updates the Dull Knife family history in his new afterword for this Bison Books edition.

An award-winning investigative journalist and former New York bureau chief for The Miami Herald, Joe Starita is now an associate professor of journalism at the University of Nebraska.

"This is a living, heartbreaking account of four generations of a Lakota Sioux family. . . . A truly fine book rich in historical and personal detail of a family and a people."—The Boston Globe
— The Boston Globe

"No superfluous sentimentality impedes this saga; it moves across the pages with an immediacy that belies its century-plus timespan. . . . The Dull Knifes of Pine Ridge is a story of raw endurance and of a passion for the honorable freedom of mind, heart, and body."—The Miami Herald
— The Miami Herald

"A fine story of cultural survival and a history that should find a place alongside those of a Crazy Horse or a Sitting Bull-integral parts of the American experience."—Booklist
— Booklist