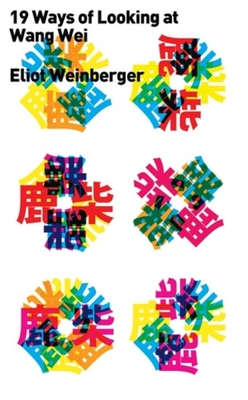 A new expanded edition of the classic study of translation, finally back in print

The difficulty (and necessity) of translation is concisely described in Nineteen Ways of Looking at Wang Wei, a close reading of different translations of a single poem from the Tang Dynasty—from a transliteration to Kenneth Rexroth’s loose interpretation. As Octavio Paz writes in the afterword, “Eliot Weinberger’s commentary on the successive translations of Wang Wei’s little poem illustrates, with succinct clarity, not only the evolution of the art of translation in the modern period but at the same time the changes in poetic sensibility.”

Eliot Weinberger is an essayist, editor, and translator. He lives in New York City.

Octavio Paz (1914-1998) was born in Mexico City. He wrote many volumes of poetry, as well as a prolific body of remarkable works of nonfiction on subjects as varied as poetics, literary and art criticism, politics, culture, and Mexican history. He was awarded the Jerusalem Prize in 1977, the Cervantes Prize in 1981, and the Neustadt Prize in 1982. He received the German Peace Prize for his political work, and finally, the Nobel Prize for Literature in 1990.

Essential reading for anyone interested in translation.
— M. A. Orthofer - Complete Review

There is a great profusion of Chinese poetry in English, and this fact is significant. It suggests that, despite all the barriers, this poetry does communicate, even urgently, to modern Western readers. Both the difficulty and the urgency are elegantly demonstrated in Nineteen Ways of Looking at Wang Wei. Weinberger collates and comments on a series of translations of Wang Wei’s famous poem ‘Deer Park,’ allowing the reader to see how even this brief poem—twenty characters, in four lines—contains endless shades of meaning and implication.

Weinberger’s sensitivity to words and gift for clear thinking underlie nearly every page in Nineteen Ways...and he writes with erudition and charm. He sees lines of Wang Wei’s poems as 'both universal and immediate,' and he sees much else in human cultures in that same spirit, which I think is wonderful.

Nineteen cheers to New Directions for reissuing Eliot Weinberger's Nineteen Ways of Looking at Wang Wei, first published in 1987 and hard to find since then. In this tiny volume, Weinberger examines nineteen different translations of a classic four-line poem by the eighth-century poet Wang Wei. The result is the best primer on translation...also the funniest and most impatient.

Weinberger is like an ancient Chinese zither player, tuning lonely in the mountain overlooking the world.
— Bei Dao