On Racial Icons: Blackness and the Public Imagination (Pinpoints) (Paperback) 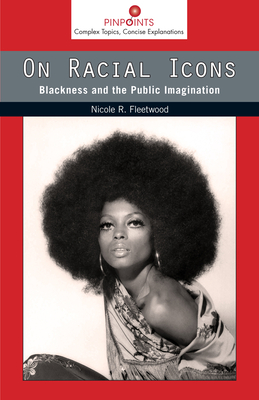 What meaning does the American public attach to images of key black political, social, and cultural figures? Considering photography’s role as a means of documenting historical progress, what is the representational currency of these images? How do racial icons “signify”?

Nicole R. Fleetwood’s answers to these questions will change the way you think about the next photograph that you see depicting a racial event, black celebrity, or public figure. In On Racial Icons, Fleetwood focuses a sustained look on photography in documenting black public life, exploring the ways in which iconic images function as celebrations of national and racial progress at times or as a gauge of collective racial wounds in moments of crisis.

Offering an overview of photography’s ability to capture shifting race relations, Fleetwood spotlights in each chapter a different set of iconic images in key sectors of public life. She considers flash points of racialized violence in photographs of Trayvon Martin and Emmett Till; the political, aesthetic, and cultural shifts marked by the rise of pop stars such as Diana Ross; and the power and precarity of such black sports icons as Serena Williams and LeBron James; and she does not miss Barack Obama and his family along the way. On Racial Icons is an eye-opener in every sense of the phrase.
Images from the book. (http://rutgerspress.rutgers.edu/pages/Fleetwood.aspx)

NICOLE R. FLEETWOOD is the director of the Institute for Research on Women and an associate professor of American Studies at Rutgers University. She specializes in visual culture and media studies, black cultural studies, and gender theory. She is the author of the award-winning book Troubling Vision: Performance, Visuality, and Blackness.

"Nicole Fleetwood’s astute study makes transparent the power of images and strengthens our understanding as to how significant black figures transformed our imaginary as a fixed construction based on media perceptions. An impressive read!"
— Deborah Willis

Nicole R. Fleetwood calls her latest book "an act of love." But readers may end up referring to it as tough love as Fleetwoodoffers a searing investigation into America's fixation on black images from President Obama to a living legend of tennis, Serena Williams. With the author's definition of 'racial icons' as "an idolized image or figure, that is simultaneously shrouded in the legacies of U.S. racism and its devaluing of black life," the book aims to unpack the multiple implications of black images both seen and unseen. < Read the nterview at: http://huff.to/1hvYVwM >
— Peter 'Souleo' Wright

"With On Racial Icons: Blackness and the Public Imagination, Nicole Fleetwood examines the emotional work and cultural meanings of black icons especially the place of veneration, condescension, celebrity, and commodification in the production of photographic images of Barack Obama, Diana Ross, Trayvon Martin, Serena Williams, and LeBron James. Accessible and concise, yet sensitive and insightful, Fleetwood invites us to dwell in the spaces where black iconic images circulate, to feel the hopes they gather, to understand the conflicts they engender, and above all to appreciate the implications they suggest for how we see ourselves."
— Herman Gray

“An innovative and dynamic study of blackness, iconicity, and visual culture. It is the conceptual arc of the book –an accruing examination of the meanings of the racial icon—that makes this study so effective.  Fleetwood’s focus of visual culture as public culture makes On Racial Icons an extraordinary resource for the interdisciplinary teaching and study of African American studies, American studies, visual culture studies, and media studies.”