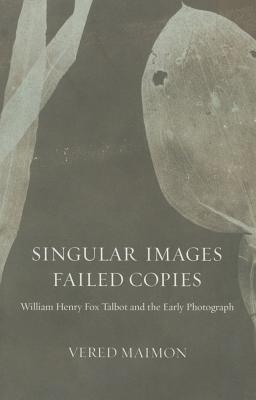 By Vered Maimon
Email or call for price
Special Order

Focusing on early nineteenth-century England?and on the works and texts of the inventor of paper photography, William Henry Fox Talbot?Singular Images, Failed Copies historicizes the conceptualization of photography in that era as part of a major historical change.

Treating photography not merely as a medium or a system of representation but also as an epistemology, Vered Maimon challenges today’s prevalent association of the early photograph with the camera obscura. Instead, she points to material, formal, and conceptual differences between those two types of images by considering the philosophical and aesthetic premises linked with early photography. Through this analysis she argues that the emphasis in Talbot’s accounts on the removal of the “artist’s hand” in favor of “the pencil of nature” did not mark a shift from manual to “mechanical” and more accurate or “objective” systems of representation.

In Singular Images, Failed Copies, Maimon shows that the perception of the photographic image in the 1830s and 1840s was in fact symptomatic of a crisis in the epistemological framework that had informed philosophical, scientific, and aesthetic thought for two centuries.

Vered Maimon is senior lecturer of art history at Tel Aviv University. She is coeditor of Communities of Sense: Rethinking Aesthetics and Politics.

"Singular Images, Failed Copies offers a significant contribution to the scholarship on William Henry Fox Talbot and the scientific and philosophical climate in which he produced his photographs."—Frederick Gross, Savannah College of Art and Design

"A striking new analysis of William Henry Fox Talbot’s famous ‘pencil of nature’ botanical photos as diagram rather than index, Singular Images, Failed Copies argues against familiar ideas of the photograph in relation to objectivity or impersonality. Vered Maimon revisits from a fresh angle questions about photography and its role in art, science, and society."—John Rajchman, Columbia University

"Singualar Images, Failed Copies will take its rightful place as an important addition to the literature on both the history of early photography. . . and the espistemological changes of the early years of the nineteenth century."—Leonardo Reviews