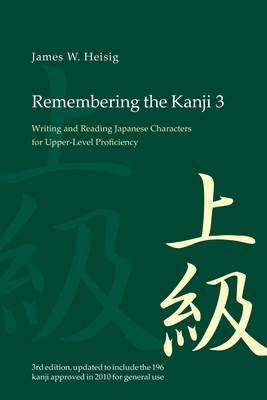 Students who have learned to read and write the kanji taught in Japanese schools run into the same difficulty that Japan university students themselves face: the number of characters included in the approved list is not sufficient for advanced reading and writing. Although each academic specialization requires supplementary kanji of its own, there is considerable overlap. With that in mind, this book employs the same methods as Volumes 1 and 2 of Remembering the Kanji to introduce additional characters useful for upper-level proficiency, bringing the total of all three volumes to 3,000 kanji.

The 3rd edition has been updated to reflect the 196 new kanji approved by the government in 2010, all of which have been relocated in Volume 1. The selection of 800 new kanji is based on frequency lists and cross-checked against a number of standard Japanese kanji dictionaries. Separate parts of the book are devoted to learning the writing and reading of these characters. The writing requires only a handful of new "primitive elements." A few are introduced as compound primitives ("measure words") or as alternative forms for standard kanji. The majority of the kanji are organized according to the elements introduced in Volume 1. As in Volume 2, Chinese readings are arranged into groups for easy reference, enabling the student to take advantage of the readings assigned to "signal primitives" already learned. Seven indexes include hand-drawn samples of the new characters introduced and cumulative lists of the key word and primitive meaning, and of the Chinese and Japanese pronunciations, that appear in all 3 volumes of the series.