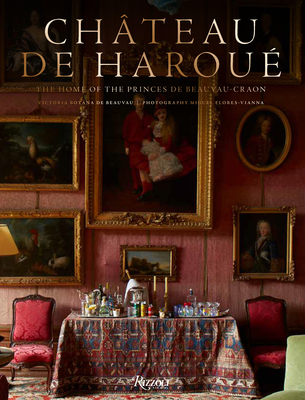 A dazzling tour of Château de Haroué, the epitome of opulent French style and one of today’s must-see examples of vibrant eighteenth-century architecture and design.


Located in a remote village in the Lorraine region of northeastern France, the estate of Château de Haroué is an unrivaled treasure of Gallic culture and heritage. Built between 1720 and 1729 for Marc de Beauvau, Prince de Beauvau-Craon, constable of Lorraine and viceroy of Tuscany, his descendents have inhabited the castle and kept it going in high style ever since.

Throughout the pages of this volume, readers are invited to discover the château’s impressive architecture and fashionably chic interior design. Newly commissioned photographs by leading interiors photographer Miguel Flores-Vianna alongside archival documents offer unprecedented access to 82 sumptuous rooms, which are enlivened by dynamic tapestries and family portraits, a breathtaking artwork collection, and stately antique furniture. Informative texts by Victoria Botana de Beauvau, one of France’s preeminent modern-day aristocrats and an It girl in Parisian society, paint a picture of the castle’s architectural splendors, lifestyle, notable events, and her family’s unique approach to keeping history alive—all published in an exquisitely crafted book, with creative direction by Peter Copping, worthy of this stunning property.

Victoria Botana de Beauvau is a creative director and producer. Miguel Flores-Vianna is a renowned Argentine-born, London-based photographer whose images regularly appear in Architectural Digest and Cabana magazine. Jean-Louis Deniot is a French interior designer. A close friend of the de Beauvau-Craon family, he is a connoisseur of the history of Château de Haroué.

"Now, 300 years after the first stone was laid, a member of the family’s newest generation, Victoria Botana de Beauvau-Craon, has produced a book for Rizzoli, Château de Haroué: The Home of the Princes de Beauvau-Craon, that beautifully captures the splendors of the 82-room castle and surrounding 2,179-acre park. Designed by the prominent 18th-century architect Germain Boffrand, the palace has 365 windows, 52 fireplaces, 12 turrets, and four bridges, symbolizing the eternal rhythms of the year—and, implicitly, the permanence of the château, praised even in its time as one of the most elegant in France." —AIR MAIL

"The most romantic chateau in France is revealed in a gorgeous new book out this month. The history-filled Château de Haroué in eastern France, is the style-rich family home of the noble Beauvau-Craon family, who continue to live there. The new book is written by  Victoria Botana de Beauvau-Craon, the daughter of the current heir,  Princess Minnie de Beauvau-Craon.It’s a gorgeous and very personal book that reveals the complicated and fascinating history of the family, the ancestors, the characters and stories of the region. It shows how generations of the family  lived there,  celebrations and events, and the rooms and private quarters. The house has been lovingly protected and lavished with care since it was built starting in 1720. Each turret and hallway and salon and corner  is filled with art collections and signatures of lives well-lived,  of connoisseurship and consistent taste and style.Superb interiors and details are captured in photography by the great Miguel Flores-Vianna ('Haute Bohemians'). Images styled by Peter Copping, the British fashion designer (formerly creative director of Oscar de la Renta)  who lives in Western France." —STYLESALONISTE