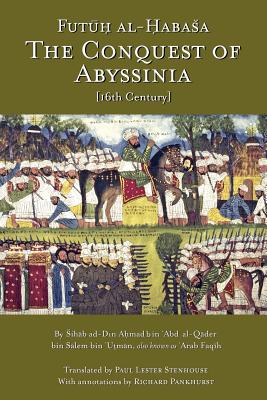 Sihab ad-Din Ahmad bin Abd al-Qader's account of the early sixteenth century jihad, or holy war, in Ethiopia, of Imam Ahmad bin Ibrahim, better known as Ahmad Gran or the Left Handed, is a historical classic. The Yamani author was an eyewitness of several of the battles he describes and is an invaluable source. His book, which is full of human, and at times tragic drama, makes a major contribution to our knowledge of a crucially important period in the history of Ethiopia and the Horn of Africa.

Futuh al-Habasa, or 'Conquest of Abyssinia' undoubtedly reflects the situation as it seemed to its Yamani author at the time of its composition. The forces of Imam Ahmad bin Ibrahim had occupied the greater part of Ethiopia. The resistance of Emperor Lebna Dengel had virtually come to an end, and many Christians had chosen to convert to Islam. The victorious Imam's regime seemed there to stay.

This was, however, far from the end of the story. The Imam was killed in battle on February 21, 1543, whereupon his army almost immediately disintegrated. Those of his soldiers who could do so made their way back to the East. Not a few Muslim converts reverted to their former faith.

The Futuh thus refers to a relatively short, though crucially important, period in Ethiopia's long history. The book is nevertheless valuable, in that its author was an eyewitness of many of the events he describes, and writes with a degree of objectivity rare for his time.