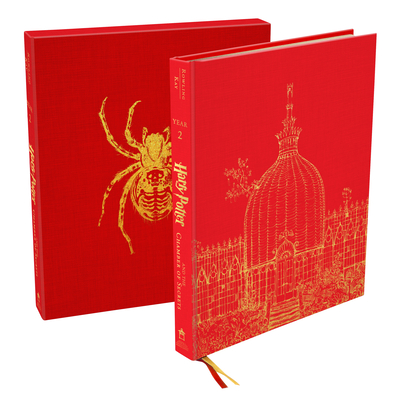 This is book number 2 in the Harry Potter series.

In addition to the jacketed hardcover illustrated edition of Harry Potter and the Chamber of Secrets, we are pleased to offer a small-run, high-end collector's format in time for the 2016 holiday season. Special features include:

A rare opportunity and a luxurious reading experience, this collector's edition is the ultimate gift for Harry Potter fans and bibliophiles alike.

J.K. Rowling is the author of the bestselling Harry Potter series of seven books, published between 1997 and 2007, which have sold over 450 million copies worldwide, are distributed in more than 200 territories and translated into 79 languages, and have been turned into eight blockbuster films by Warner Bros. She has written three companion volumes to the series in aid of charity: Quidditch Through the Ages and Fantastic Beasts and Where to Find Them in aid of Comic Relief; and The Tales of Beedle the Bard in aid of her children's charity Lumos. Her website and e-publisher Pottermore is the digital hub of the Wizarding World. She has recently collaborated with writer Jack Thorne and director John Tiffany on the stage play Harry Potter and the Cursed Child Parts One and Two, which is now running at The Palace Theatre in London’s West End. J.K. Rowling is also the author of a novel for adult readers, The Casual Vacancy, and, under the pseudonym Robert Galbraith, is the author of three crime novels featuring private detective Cormoran Strike, which are to be adapted for BBC television. Fantastic Beasts and Where to Find Them marks J.K. Rowling's screenwriting debut.

Jim Kay won the Kate Greenaway Medal in 2012 for his illustrations in A Monster Calls by Patrick Ness. Jim studied illustration at the University of Westminster and since graduating has worked in the archives of Tate Britain and the Royal Botanic Gardens at Kew. Jim has produced concept work for television and contributed to a group exhibition at the Victoria and Albert Museum in London. He now lives and works in Northamptonshire, England, with his partner and a rescued greyhound.