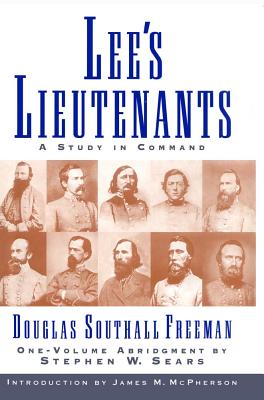 A towering landmark in Civil War literature, long considered one of the great masterpieces of military history -- now available in a one-volume abridgment.

Lee's Lieutenants: A Study in Command is the most colorful and popular of Douglas Southall Freeman's works. A sweeping narrative that presents a multiple biography against the flame-shot background of the American Civil War, it is the story of the great figures of the Army of Northern Virginia who fought under Robert E. Lee.

Dr. Freeman describes the early rise and fall of General Beauregard, the developing friction between Jefferson Davis and Joseph E. Johnston, the emergence and failure of a number of military charlatans, and the triumphs of unlikely men at crucial times. He also describes the rise of the legendary "Stonewall" Jackson and traces his progress in the Shenandoah Valley Campaign and into Richmond amid the acclaim of the South.

The Confederacy won resounding victories throughout the war, but seldom easily or without tremendous casualties. Death was always on the heels of fame, but the men who survived -- among them Jackson, Longstreet, and Ewell -- developed as commanders and men. Lee's Lieutenants follows these men to the costly battle at Gettysburg, through the deepening twilight of the South's declining military might, and finally to the collapse of Lee's command and his formal surrender in 1865. To his unparalleled descriptions of men and operations, Dr. Freeman adds an insightful analysis of the lessons learned and their bearing upon the future military development of the nation.

Accessible at last in a one-volume edition abridged by noted Civil War historian Stephen W. Sears, Lee's Lieutenants is essential reading for all Civil War buffs, students of war, and admirers of the historian's art as practiced at its very highest level.

Douglas Southall Freeman, the son of a Confederate soldier, was born in Lynchburg, Virginia, in 1886. He was commissioned to write a one-volume biography of Lee in 1915, but his research and writings over two decades produced four large volumes. Freeman won another Pulitzer Prize for his six-volume definitive biography of George Washington. He died in 1953.