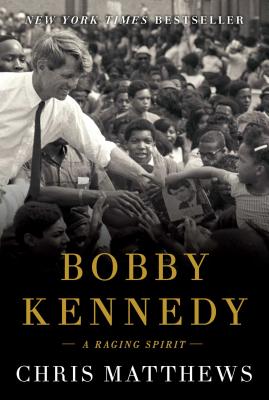 A revealing new portrait of Robert F. Kennedy that gets closer to the man than any book before, by bestselling author Chris Matthews, an esteemed Kennedy expert and anchor of MSNBC’s Hardball.

With his bestselling biography Jack Kennedy, Chris Matthews shared a new look of one of America’s most beloved Presidents and the patriotic spirit that defined him. Now, with Bobby Kennedy, Matthews returns with a gripping, in-depth, behind-the-scenes portrait of one of the great figures of the American twentieth century.

Overlooked by his father, and overshadowed by his war-hero brother, Bobby Kennedy was the perpetual underdog. When he had the chance to become a naval officer like Jack, Bobby turned it down, choosing instead to join the Navy as a common sailor. It was a life changing experience that led him to connect with voters from all walks of life: young or old, black or white, rich or poor. They were the people who turned out for him in his 1968 campaign. RFK would prove himself to be the rarest of politicians—both a pragmatist who knew how to get the job done and an unwavering idealist who could inspire millions.

Drawing on extensive research and interviews, Matthews pulls back the curtain on the public and private worlds of Robert Francis Kennedy. He shines a light on all the important moments of his life, from his early years and his start in politics to his crucial role as attorney general in his brother’s administration and his tragic run for president. This definitive book brings Bobby Kennedy to life like never before and is destined to become a political classic.

Chris Matthews is a visiting professor at Fulbright University, Vietnam. He is the author of the New York Times bestsellers Bobby Kennedy: A Raging Spirit; Jack Kennedy: Elusive Hero; Tip and the Gipper: When Politics Worked; Kennedy & Nixon; and Hardball. For twenty years he anchored Hardball with Chris Matthews on MSNBC.

“Chris Matthews evocatively brings the man and his moment back to life. It is a story that needs to be told again as a heroic counterpoint to the Trump era’s fundamental disrespect for the idea that politics can be a noble profession.”

“Considerable insight from beginning to end”

“A brisk, admiring portrait that burnishes the Kennedy image.”

“If you love reading about politics, if you ever loved the Kennedys or were fascinated by them, if you love biographical history or if you just like a good yarn about a brooding soul who turns into an uplifting, magnetic force—Chris Matthews’ “Bobby Kennedy: A Raging Spirit” Should be your next read. It’s well-researched, dramatically told. It brings those times—Camelot and after—back to life.”

"Matthews is skilled at weaving tension and conflict throughout the book. One doesn’t just read the words, but experiences the tension and emotions....The depth of Bobby Kennedy: A Raging Spirit provides insight into this man’s spirit and what drove him to greatness. Matthews does an excellent job of pulling Bobby out from behind any family shadows to give us an in-depth portrait of what could have been."

"Readers witness the evolution of Kennedy’s soul. Through tragedy after tragedy we find the man humanized."

"Chris Matthews, host of MSNBC’s Hardball, has synthesized a familiar story into a brisk, straightforward biography in which he casts Kennedy’s life as an existential progress of the soul—which it most definitely was....Matthews’ narrative, bolstered by archival interviews, manages to advance our understanding of an enigmatic man....Matthews has a sharp eye for those moments in Kennedy’s early life that flag the man he would become....'Give sorrow words,' Shakespeare wrote in Macbeth. This Matthews has done."