The Story of Civilization: The Making of the Modern World Text Book (Paperback) 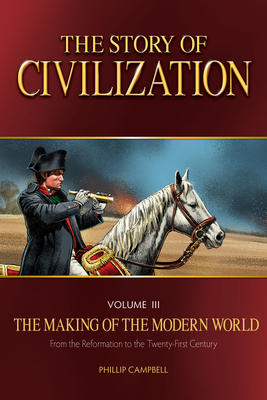 Children should not just read about history, they should live it. In The Story of Civilization, the stories that have shaped humanity come alive like never before. Author Phillip Campbell uses his historical expertise and story-telling ability together in tandem to present the content in a fresh and thrilling way. The Story of Civilization reflects a new emphasis in presenting the history of the world as a thrilling and compelling narrative. Within each chapter, children will encounter short stories that place them directly in the shoes of historical figures, both famous and ordinary, as they live through legendary battles and invasions, philosophical debates, the construction of architectural wonders, the discovery of new inventions and sciences, and the exploration of the world. Volume III: The Making of the Modern World continues the journey, picking up where Volume II left off amidst the Renaissance and quickly diving in to the history-altering events of the Reformation. This fracturing of the Church dramatically altered the course of modern Europe and the world at large. But during the most tumultuous times, God gives us the greatest saints. Children will meet great figures like Sts. Pius V, Thomas More, John Vianney, and Margaret Mary Alacoque, as well as powerful leaders like Napoleon and Kings Henry VIII of England and Louis XIV of France. This volume brings us through present-day Europe, showing us the affects of two world wars and how the Church responded to these changing times. The strength of the content lies not only in the storybook delivery, but also in the way it presents history through the faithful prism of the Church. Have you always wanted your children to learn about world history from a Catholic perspective? Here, you'll have the trusted resource you've always wanted. Did you know...
- Columbus called the Native Americans "Indians" because he thought he had landed in India?
- Henry VIII was once known as "Defender of the Faith"?
- A string of popes became known as the "prisoners of the Vatican" because they never left the Vatican grounds for 60 years?
- King Louis XIV was known as the "Sun King" because of the bright brilliance of his palace at Versailles?
- The Soviet Union built what was called "the Iron Curtain" behind which they ruled half of Europe? Embark on the journey now to learn of all these wonders and more

Phillip Campbell holds a BA in European history from Ave Maria University and a license in secondary education from Madonna University. He teaches middle school history and Sacred Scripture for the St. Augustine Homeschool Enrichment Program as well as high school history for Homeschool Connections. Mr. Campbell is the editor of The Complete Works of St. Cyprian of Carthage (Arx Publishing) and has self-published several books through his website, Cruachan Hill Press.His writings have also appeared in such publications as the St. Austin Review and The Distributist Review. Mr. Campbell served as the mayor of his hometown of Howell, Michigan, from 2011 to 2015 (the youngest to ever hold the office). Mr. Campbell and his wife reside in southeast Michigan, where they homeschool their five children. He is a regular speaker at homeschool conferences around the United States