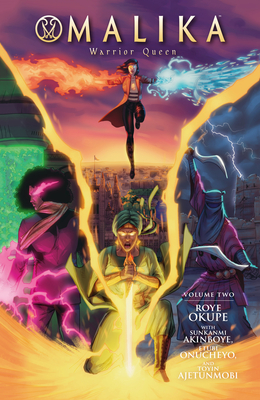 Malika, queen and commander of the fifteenth-century West-African empire Azzaz, has been flung into the year 2025.

After years of moving in the shadows, Malika is forced out of hiding by the Olon Jin--ancient sorcerers imprisoned for centuries because of their obsession with dark magic. In their sights is the Fire and Frost stone, a relic that holds the combined power of two legendary dragons. On her journey to Egypt to retrieve the stone, Malika uncovers a sinister plot that predates her own five-hundred-year-old legend as Warrior Queen and threatens to end humanity.

This Dark Horse edition will collect the YouNeek Studios editions of Malika: Fallen Queen Parts 1 and 2.

Born in Lagos, Nigeria, Roye Okupe is an award-winning filmmaker, author, speaker and entrepreneur whose passion for comics and animation led him to found YouNeek Studios in 2012. Under that umbrella, Roye wrote, produced and directed several animated productions including, but not limited to, the award-winning and critically acclaimed Malika – Warrior Queen Animated Short.

These productions have allowed Roye to attain many prestigious recognitions such as being #5 on Ventures Africa’s list of 40 African innovators to watch (2016) as well as being part of NewAfrican Magazines’ 100 most influential Africans two years in a row (2016 & 2017). In August 2015, Roye's debut graphic novel: E.X.O. The Legend of Wale Williams Part One was received with critical acclaim and has since been featured on CNN, Forbes, The New York Times, NBC, The Guardian, ABC7, BBC, The Huffington Post, Mashable and more!