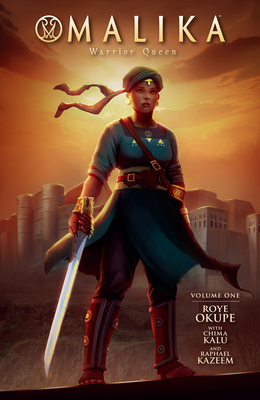 **Part of the YouNeek YouNiverse!  Extraordinary fantasy and superhero stories inspired by African history, culture, and mythology—created by the best Nigerian comics talent!**

Following the exploits of queen and military commander Malika, who struggles to keep the peace in her ever-expanding empire, Azzaz, this historical fantasy is set in fifteenth-century West Africa and created by an all-star team from Nigeria.

Growing up as a prodigy, Malika inherits the crown from her father in an incredibly unusual way, splitting the kingdom of Azzaz in half. After years of civil war, Malika finally unites all of Azzaz, expanding it into one of the largest empires in all of West Africa--but expansion will not come without its costs. Enemies begin to rise within her council, and Azzaz catches the attention of one of the most feared superpowers the world has ever known: the Ming Dynasty! As Malika fights to win the clandestine war within the walls of her empire, she must also turn her attention to an indomitable and treacherous foe with plans to vanquish her entire people.

"Our mission is and always has been about empowering African creatives and storytelling while bringing both to a global audience." — Roye Okupe, Founder/Creative Director at YouNeek Studios

Born in Lagos, Nigeria, Roye Okupe is an award-winning filmmaker, author, speaker and entrepreneur whose passion for comics and animation led him to found YouNeek Studios in 2012. Under that umbrella, Roye wrote, produced and directed several animated productions including, but not limited to, the award-winning and critically acclaimed Malika – Warrior Queen Animated Short.

These productions have allowed Roye to attain many prestigious recognitions such as being #5 on Ventures Africa’s list of 40 African innovators to watch (2016) as well as being part of NewAfrican Magazines’ 100 most influential Africans two years in a row (2016 & 2017). In August 2015, Roye's debut graphic novel: E.X.O. The Legend of Wale Williams Part One was received with critical acclaim and has since been featured on CNN, Forbes, The New York Times, NBC, The Guardian, ABC7, BBC, The Huffington Post, Mashable and more!