But That's Another Story: A Photographic Retrospective of Milton H. Greene (Hardcover) 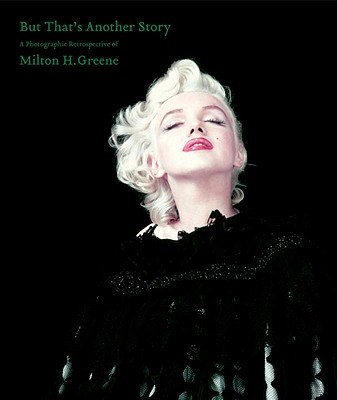 But That’s Another Story: A Photographic Retrospective of Milton H. Greene reproduces, in their original clarity and integrity, pictures that have been largely unavailable since Greene’s death in 1985. Organized thematically, the book features both the widely published fashion and celebrity series (including the campaign Greene shot for American Airlines in the 1950s), and intimate backstage candids. A whole chapter is dedicated to photos of Marilyn Monroe, where some of her most iconic portraits mix with private moments from her life. Ultimately, Greene’s photography invites us back to an era when film and fashion, art and style were at their highest.

Milton H. Greene (1922-1985) photographed for "Look," "Life," "Town & Country," "Harper's Bazaar," "Vogue," and others throughout the 1950s and 60s, and won awards from the American Institute of Graphic Arts and the Art Directors Club. In recent years, his work has been exhibited at the International Center of Photography in New York, the Art Institute of Chicago, and the Smithsonian Institute in Washington, D.C., among others. He collaborated with Norman Mailer on "Of Women and Their Elegance" (Simon and Schuster, 1980), a fictional autobiography of Marilyn Monroe.

Joshua Greene is the president of "The Archives," a company he created in 1993 to restore and market a 60,000-image collection created by his father. Before starting "The Archives," Joshua Greene was a well-known professional photographer, whose work has been published in "Vogue," "House & Garden," "Elle Decor," "Victoria," and "House Beautiful," among others. He is also the author of 15 books on food, gardening, and home furnishings.

Amy Greene, now retired, is a noted figure in the beauty and cosmetics world; she served as a beauty editor at "Glamour" for 10 years, helped develop the "Beauty Checkers" line with Henri Bendel, and coauthored the makeup guide "The Successful Face with Molly Pomerance" (Summit Books, 1985). She and Milton were married for more than 36 years and had two sons, Joshua and Anthony.

Tippi Hedren is an actress with a career spanning six decades. She is best known for her role as Melanie Daniels in Alfred Hitchcock's "The Birds," as well as for her extensive efforts in animal rescue at California's Shambala Preserve, of which she is the founder and president.