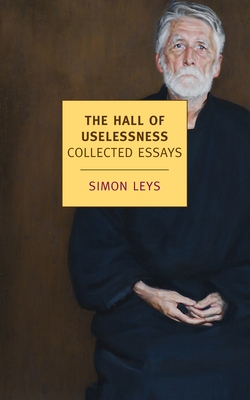 Simon Leys is a Renaissance man for the era of globalization. A distinguished scholar of classical Chinese art and literature and one of the first Westerners to recognize the appalling toll of Mao’s Cultural Revolution, Leys also writes with unfailing intelligence, seriousness, and bite about European art, literature, history, and politics and is an unflinching observer of the way we live now.

The Hall of Uselessness is the most extensive collection of Leys’s essays to be published to date. In it, he addresses subjects ranging from the Chinese attitude to the past to the mysteries of Belgium and Belgitude; offers portraits of André Gide and Zhou Enlai; takes on Roland Barthes and Christopher Hitchens; broods on the Cambodian genocide; reflects on the spell of the sea; and writes with keen appreciation about writers as different as Victor Hugo, Evelyn Waugh, and Georges Simenon. Throughout, The Hall of Uselessness is marked with the deep knowledge, skeptical intelligence, and passionate conviction that have made Simon Leys one of the most powerful essayists of our time.

Simon Leys (1935 - 2014) is the pen name of Pierre Ryckmans, who was born in Belgium and settled in Australia in 1970. He taught Chinese literature at the Australian National University and was Professor of Chinese Studies at the University of Sydney from 1987 to 1993. Leys’s writing has appeared in The New York Review of Books, Le Monde, Le Figaro Littéraire, and other periodicals. Among his books are Chinese Shadows, The Death of Napoleon (forthcoming from NYRB Classics), Other People’s Thoughts, and The Wreck of the Batavia & Prosper. In 1996 he delivered the Australian Broadcasting Corporation’s Boyer lectures. He won many awards, including the Prix Renaudot, the Prix Femina, the Prix Guizot, and the Christina Stead Prize for Fiction.

"What made Leys most remarkable was his depth, his continuous effort to try to get to the bottom of things, to understand them, and to render them with the great simplicity proper of the people who really worked through them." —Francesco Sisci, Asia Times Online

"He was a literary scholar in the Chinese literati tradition, that is to say, his scholarship was a form of literature." —Ian Buruma

“That early on I developed a critical distance from the ideologies of the epoch I owe to writers like Simon Leys and Guy Debord. They kept me from being a dupe.”
—Olivier Assayas

“The message these pieces drive home with wit and uncommon clarity is this: there is a central truth that may—no, must!—be spoken. There is a manner by which life may be lived fully and well. And there is a richer, deeper, grander conception of human nature than we are currently given to understand. To see Leys’s essays assembled is to appreciate, if you haven’t already, the range of philosophical, artistic and literary interests that sustain even his slightest productions.”
—Geordie Williamson, The Australian

"No one in the China field has combined profound erudition and stiletto insight as well as Leys. For me he has been the North Star of China watching—equally as constant, and just as brilliant."
—Perry Link, Professor Emeritus of East Asian Studies at Princeton University