Political Suicide: The Fight for the Soul of the Democratic Party (Paperback) 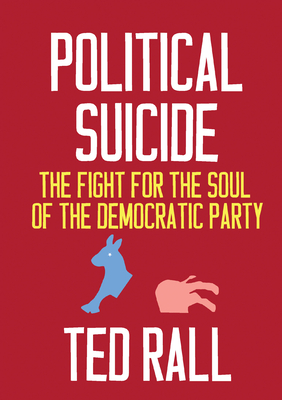 Ted Rall's latest is a no-holds-barred look at the civil war raging within the Democratic Party in the graphic style of his national bestseller, Bernie.

There's a split in the Democratic Party. Progressives are surging with ideas and candidates like Bernie Sanders, Elizabeth Warren and Alexandria Ocasio-Cortez. 72 percent of Democratic voters are progressives. But centrists like Tom Perez and the Clintons still run the DNC party apparatus--and they don't want to compromise. Intraparty warfare exploded into the open in 2016. It's even bigger now.
The struggle goes back decades, to the New Left and the election of Richard Nixon over George McGovern. It continued with the Democratic establishment's quashing of insurgent progressives like Jesse Jackson, Ralph Nader and Howard Dean. The vast scale of the DNC's secret conspiracy to stop Bernie Sanders in 2016 nomination came out courtesy of WikiLeaks.
Will Democrats again become the party of the working person? Or will the corporatists win and continue their domination of electoral politics? Ted Rall gets to the bottom of the story neither the Democrats nor the Republicans want you to know: how the civil war in the Democratic Party poses an existential threat to the two-party system.

Twice the winner of the Robert F. Kennedy Journalism Award and a Pulitzer Prize finalist, TED RALL is a political cartoonist, opinion columnist, graphic novelist and occasional war correspondent whose work has appeared in hundreds of publications, including the New York Times, Washington Post, Village Voice, and Los Angeles Times. He is the illustrator of the full-length comic in Billionaires & Ballot Bandits: How to Steal an Election in 9 Easy Steps, written by Greg Palast.