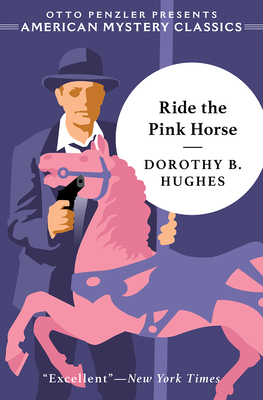 By Dorothy B. Hughes, Sara Paretsky (Introduction by)
$15.95

Sailor used to be Senator Willis Douglass’ protege. When he met the lawmaker, he was just a poor kid, living on the Chicago streets. Douglass took him in, put him through school, and groomed him to work as a confidential secretary. And as the senator’s dealings became increasingly corrupt, he knew he could count on Sailor to clean up his messes.

Willis Douglass isn’t a senator anymore; he left Chicago, Sailor, and a murder rap behind and set out for the sunny streets of Santa Fe. Now, unwilling to take the fall for another man’s crime, Sailor has set out for New Mexico as well, with blackmail and revenge on his mind. But there’s another man on his trail as well—a cop who wants the ex-senator for more than a payoff. In the midst of a city gone mad, bursting with wild crowds for a yearly carnival, the three men will violently converge…

The suspenseful tale that inspired one of the most beloved films noir of all time, Ride the Pink Horse is a tour-de-force that confirms Dorothy B. Hughes’ status as a master of the mid-century crime novel.

Dorothy B. Hughes (1904–1993) was a mystery author and literary critic. Born in Kansas City, she studied at Columbia University and won an award from the Yale Series of Younger Poets for her first book, the poetry collection Dark Certainty (1931). After writing several unsuccessful manuscripts, she published The So Blue Marble in 1940, winning praise for its terse, hard-boiled prose.

Hughes published thirteen more novels, the best known of which are The Fallen Sparrow (1942), Ride the Pink Horse (1946), In a Lonely Place (1947). All three were made into successful films. In the early fifties, Hughes largely stopped writing fiction, preferring to focus on criticism, for which she would go on to win an Edgar Award. In 1978, the Mystery Writers of America presented Hughes with the Grand Master Award for literary achievement.

Sara Paretsky is the author of the bestselling V.I. Warshawski novels, including, most recently, Bleeding Kansas. Paretsky is the winner of many awards, including the Cartier Diamond Dagger award for lifetime achievement from the British Crime Writers’ Association. She lives in Chicago.

An unforgettable portrait of a hireling who dreams of making it big even though he knows he’s no good.
— Kirkus Reviews

[An] excellent novel . . . A sympathetic study of the development of a criminal.
— New York Times

Readers familiar with Hughes only from In a Lonely Place, filmed with Humphrey Bogart, will want to check out this entry in the American Mystery Classics series.

Nobody but Dorothy Hughes can cast suspense into such an uncanny spell, and she’s never done it better.
— San Francisco Chronicle

It’s a particular pleasure to recommend this novel by Dorothy B. Hughes, my favorite crime writer, which returns to circulation this month with a new (and insightful) introductory essay by Sara Paretsky.
— Sarah Weinman, The New York Times