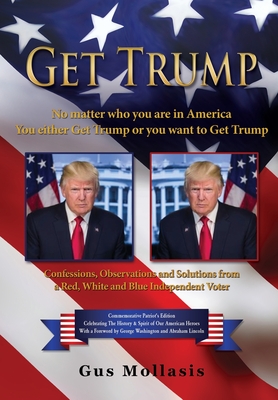 Gus Mollasis puts it perfectly in his introduction to Get Trump: "This is a book for everybody. For Red Americans. For Blue Americans.For White Americans. For Black Americans. For Gay Americans. For straight Americans. For Americans who are in the media and those who either love or hate the media. For Americans who believe in God and those who don't.For Americans living in Red or Blue states." I will only add that he is right. Those who support the president - reluctantly or enthusiastically - and those who loathe the president will find this book relentlessly interesting, and insightful. In sum, Gus Mollasis has something important to say. And says it well. That's an achievement. - Dennis PragerDennis Prager Dennis Prager: President of PragerU; nationally syndicated radio talk show host; New York Times bestselling author, most recently volume two of his five-volume commentary on the Bible, The Rational Bible. GET TRUMP follows President Trump's triumphant and transformative ascent to power battling persecutors to preserve everyone's chance at the American dream. Comprehensive, engaging and entertaining. A look at countless attempts from "The Swamp" to swallow up the President and all the deplorables who support him. A story of heroes and villains. Of prose, poetry and patriots.An odyssey of a man born on Flag Day fighting for Life, Liberty and the Pursuit of Happiness for all Americans -whether they voted for him or not. Dr. Harvey Kaltsas says, "...Trump, his modern day Leonidas who fights valiantly to save our Republic from an invasion of leftists who seek to indoctrinate and enslave us with anti-American values... Mollasis first and foremost expresses his love for America... poignantly reminds us why we readers also do so deeply love the USA, as we should." While some may see Trump as a founding Father figure protecting average Joes - whether you like, love or loathe the kid from Queens -one thing is certain- after reading Get Trump- you will either Get Trump or want to Get Trump.