Who Rules?: Sovereignty, Nationalism, and the Fate of Freedom in the Twenty-First Century (Hardcover) 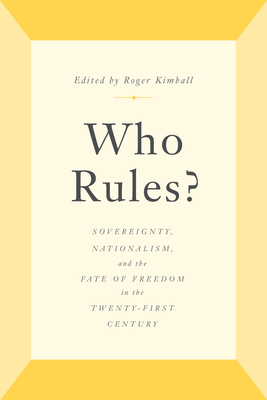 The populist phenomenon is often identified with the election of Donald Trump in November 2016. But the political, moral, and social realities for which Trump was a symbol both predated his candidacy and achieved independent fulfillment in countries as disparate as the United Kingdom, Hungary, and Brazil.

At the center of the populist challenge, this volume proposes, are two questions. The first revolves around the question of sovereignty: who governs a country? This question is at the center of all contemporary populist initiatives and has been posed with increasing urgency as the bureaucratic burden of what has come to be called the administrative state has intruded more and more forcefully upon the political and social life of Western democracies. The second key question, one related to the issue of sovereignty, concerns what Lincoln called "public sentiment" the widespread, almost taken-for-granted yet nonetheless palpable affirmation by a people of their national identity. The erosion of national sovereignty to which populism is a response has been accompanied by an erosion of that shared national consensus. Increasingly, the traditional pillars of this consensus--the binding forces of family, religion, civic duty, and patriotic filiation--have faltered before the blandishments of transnational progressivism. The debate sparked by these problems has turned on a number of high-profile issues which this volume seeks to address, including immigration, free trade, foreign policy, religious freedom, and the question of citizenship.

Roger Kimball is the editor and publisher of The New Criterion and the president and publisher of Encounter Books. He is the author and editor of many books, including The Fortunes of Permanence: Culture and Anarchy in an Age of Amnesia (St. Augustine's Press), The Rape of the Masters (Encounter), Lives of the Mind: The Use and Abuse of Intelligence from Hegel to Wodehouse (Ivan R. Dee), and Art's Prospect: The Challenge of Tradition in an Age of Celebrity (Ivan R. Dee).