Her Heart for a Compass (MP3 CD) 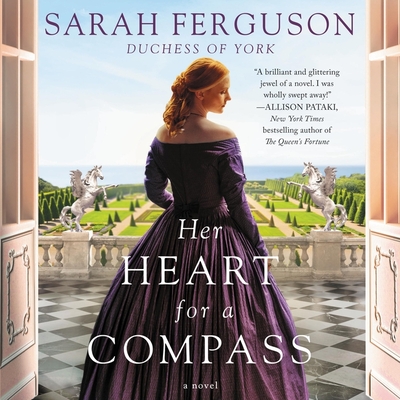 From one of the most famous former members of the British royal family, Sarah Ferguson, Duchess of York, cowritten with the acclaimed historical novelist, Marguerite Kaye--a mesmerizing novel of a young noblewoman's coming-of-age that richly details both high society and low in Victorian England.

The second daughter of the Queens' close friend, the Scottish Duke of Buccleuch, Lady Margaret Montagu Scott is expected to make an advantageous marriage. But Margaret is an impulsive and outspoken girl in a repressive society where women are, quite literally, caged in corsets and required to conform.

When Lady Margaret's parents arrange a society marriage for her, she tries to reconcile herself to the match. But shortly before her betrothal is announced, Margaret flees, leaving her parents to explain her sudden absence to an opulent ballroom stuffed with two hundred distinguished guests.

Banished from polite society, Margaret throws herself into charitable work and finds strength in a circle of female friends like herself--women intent on breaking the mold, including Queen Victoria's daughter Princess Louise. Margaret resolves to follow her heart--a journey of self-discovery that will take her to Ireland, America, and then back to Britain where she finds the life she was always meant to lead.

A bold and thoughtful story about a rebellious woman finding herself and her voice in an age of astounding technological change and great social unrest, Her Heart for a Compass is a delicious costume drama rich in atmosphere, history, and color that will thrill fans of Victoria and Bridgerton.

Includes a Q&A with Sarah Ferguson and her editor.