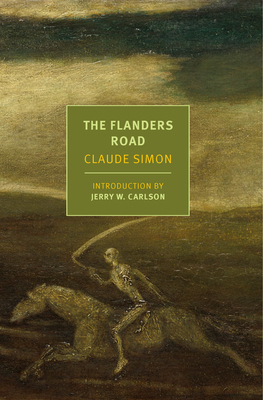 By the winner of the 1985 Nobel Prize in Literature, a riveting, stylistically audacious modernist epic about the French cavalry's bloody face-off against German Panzer tanks during WWII.

On a sunny day in May 1940, the French army sent out the cavalry against the invading German army’s Panzer tanks. Unsurprisingly, the French were routed. Twenty-six-year-old Claude Simon was among the French forces. As they retreated, he saw his captain shot off his horse by a German sniper.

This is the primal scene to which Simon returns repeatedly in his fiction and nowhere so powerfully as in his most famous novel The Flanders Road. Here Simon’s own memories overlap with those of his central character, Georges, whose captain, a distant relative, dies a similar death.

Georges reviews the circumstances and sense—or senselessness—of that death, first in the company of a fellow prisoner in prison camp and then some years later in the course of an ever more erotically charged visit to the captain’s widow, Corinne. As he does, other stories emerge: Corrine’s prewar affair with the jockey Iglisia, who would become the captain’s orderly; the possible suicide of an eighteenth-century ancestor, whose grim portrait loomed large in Georges’s childhood home; Georges’s learned father, helpless against barbarism among his books.

The great question throughout, the question that must be urgently asked even as it remains unanswerable, is whether fiction can confront and respond to the trauma of history.

Claude Simon (1913–2005) was a French novelist and the winner of the 1985 Nobel Prize in Literature. He traveled to Spain during its civil war and fought in the French cavalry during World War II. Much of his writing was based on these wartime experiences.

Richard Howard is the author of eighteen volumes of poetry and has published more than one hundred fifty translations from the French, including, for New York Review Books, Marc Fumaroli’s When the World Spoke French, Honoré de Balzac’s Unknown Masterpiece, and Guy de Maupassant’s Alien Hearts. He received a National Book Award for his translation of Les Fleurs du mal and a Pulitzer Prize for Untitled Subjects, a collection of poetry.

Jerry Carlson is an academic and documentarian. He is a senior producer at the City University of New York’s television station, CUNY TV, and has won multiple awards for his work.