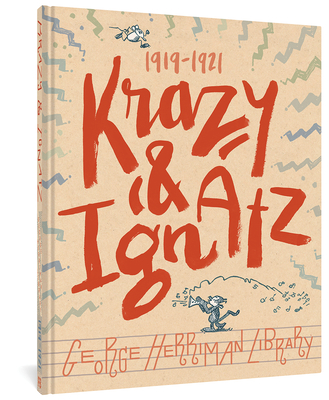 This new deluxe hardcover collects full-sized Sunday newspaper comics from 1919 through 1921 in a handsome archival collection.

As the surreal comic strip continues into the 1920s, the likes of Joe Stork, Blind Pig, and Bum Bill Bee settle into the mesas of Coconino County. Brand-new readers and Herriman aficionados alike will find out what happens when Ignatz the Mouse’s brick supplier runs out of stock, how Krazy Kat fares after taking up boxing, and what happens when a new "Katnippery" opens providing libations to the locals. Krazy & Ignatz 1919-1921 (Vol. 2) includes photographs, artwork, and introductory text by comic historians Bill Blackbeard and Michael Tisserand.

George Herriman (1880-1944), the creator of Krazy Kat, was born in New Orleans and lived most of his life in Los Angeles, California. He is considered by many to be the greatest strip cartoonist of all time.

Bill Blackbeard, the founder-director of the San Francisco Cartoon Art Museum, is the world's foremost authority on early 20th Century American comic strips. As a freelance writer, Blackbeard wrote, edited or contributed to more than 200 books on cartoons and comic strips, including The Smithsonian Collection of Newspaper Comics, 100 Years of Comic Strips, and the Krazy & Ignatz series.

At this point, no one should need any convincing that Krazy Kat is one of the greatest works of comic art ever created, and that it should form the foundation of any good collection.