The Life and Death of the Spanish Republic: A Witness to the Spanish Civil War (Paperback) 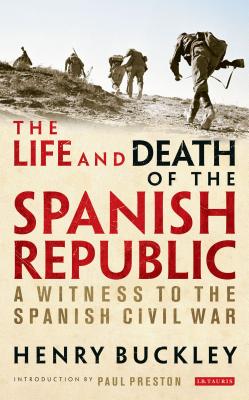 By Henry Buckley, Paul Preston (Introduction by)
Email or call for price
Out of Print

In 1940, Daily Telegraph correspondent Henry Buckley published his eyewitness account of his experiences reporting form the Spanish Civil War. The copies of the book, stored in a warehouse in London, were destroyed during the Blitz and only a handful of copies of his unique chronicle were saved. Now, seventy years after its first publication, this exceptional eyewitness account of the war is republished with a new introduction by Paul Preston. The Life and Death of the Spanish Republic is a unique account of Spanish politics throughout the entire life of the Second Republic, from its foundation of 14 April 1931 to its defeat at the end of March 1939, combining personal recollections of meetings with the great politicians of the day with eyewitness accounts of dramatic events. Buckley arrived in Spain prior to the outbreak of the war and was one of the few correspondents reporting on the conflict who had an in-depth knowledge and understanding of Spain - its people, politics and culture.
Well acquainted with the major protagonists from the conflict, he particularly admired Dr Juan Negrin, the wartime Socialist premier, but was utterly bowled over by 'La Pasionaria', the Communist orator Dolores Ibarruri. He was also a good friend of Ernest Hemingway and the renowned photographer Robert Capa. This important book is one fo the most enduring records of the Spanish Republic and the civil war and a monumental testimony to Buckley's work as a correspondent. Providing a fascinating portrait of a crucial decade of contemporary Spanish history, and based on an abundance of the eyewitness material that only a really assiduous resident journalist could collect, this book is essential reading for anyone interested in the Spanish Civil War.

Henry Buckley was the Daily Telegraph's correspondent in Spain during the Spanish Civil War. He arrived in Spain in 1929, six years before the outbreak of the conflict, and left Spain with the remnants of the Republican forces following their defeat by Franco in 1939. Paul Preston is Professor of Contemporary Spanish Studies at LSE. He is one of the world's leading historians of the Spanish Civil War.

"The Spanish Civil War was the central element of twentieth-century Spanish history. Throughout the almost eighty years since that summer of 1936, novelists, poets and historians have attempted to explain its causes and its consequences, the most bitter conflicts and the politics that drove them. Life and Death of the Spanish Republic presents a clear, sharply-defined first-hand portrait of this conflict. It is an exceptional testimony." – Julián Casanova, author of A Short History of the Spanish Civil War. "Henry Buckley was one of the best of a top array of foreign correspondents of the 1930s and after, the only first-hand observer to write an account of the entire history of the Spanish Republic.  The book is a classic, written with great personal honesty." – Stanley G. Payne "The Life and Death of the Spanish Republic is a compelling account of one time-locked country’s bid for democratic change, and of the human and structural obstacles to it.  Henry Buckley, the war correspondent’s correspondent who mentored Hemingway, already knew Spain before the Nazi and Fascist-backed military coup sent it spiralling into civil war in 1936; Buckley’s writing encapsulates the hugeness and implacability of ‘History’ in the fresh and direct detail of  ordinary people’s hopes and fears. A clear-headed, humane assessment – with an almost unbearable immediacy – of hopes raised and dashed. One of the best books ever written on the subject in any language." – Helen Graham, Professor of Spanish History, Royal Holloway, University of London

"The overwhelming value of this wonderful book is that it provides an objective picture of a crucial decade of contemporary Spanish history, based on an abundance of the eye-witness material that only a really assiduous resident correspondent could garner. For Hemingway, Hugh Thomas and others, [Henry Buckley] was a living archive of the [Spanish Civil] war. Fortunately for those who could not consult him personally, he left Life and Death of the Spanish Republic, a worthy monument to a great correspondent." – Paul Preston, author of The Spanish Holocaust, from the introduction to this book