The Vanishing Stepwells of India (Hardcover) 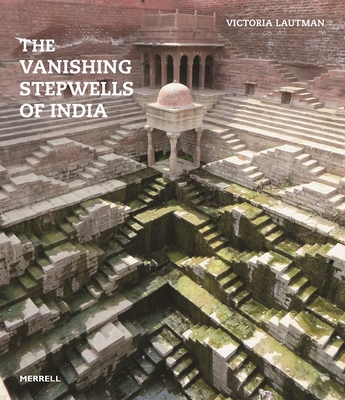 Some of the most stunning architectural structures in India are to be found below ground: these are its stepwells, ancient water stores. Stepwells are unique to India and from around the 3rd century CE were built throughout the country, particularly in the arid western regions. Excavated several stories underground in order to reach the water table, these cavernous spaces not only provided water all year long but also fulfilled other functions; they offered pilgrims and other travelers a respite from the heat, and became places in which villagers could socialize. Stepwell construction evolved so that, by the 11th century, the wells were amazingly complex feats of architecture and engineering.
The journalist Victoria Lautman first encountered stepwells three decades ago and now, a seasoned traveller to India, she has devoted several years to documenting these fascinating but largely unknown edifices before they disappear. Of the thousands of stepwells that proliferated across India, most were abandoned as a result of modernization and the depletion of water tables. Often commissioned by royal or wealthy patrons, the wells vary greatly in scale, layout, materials and shape. Those in what is now Gujarat state also served as subterranean Hindu temples that featured columned pavilions and elaborate stone carvings of deities. Islamic wells were generally less flamboyant, but incorporated arched side niches. Today, few stepwells are in use. The majority have been left to silt up, fill with rubbish and crumble into disrepair. Gradually, however, the Indian government and heritage organizations have come to recognize the need to preserve these architectural wonders. In 2014 India's best-known stepwell, the Rani ki Vav in Patan, northern Gujarat, became a UNESCO World Heritage site.
In her introduction, Lautman discusses why and where the stepwells were built. She reflects on the reasons they became derelict and considers how the appreciation of stepwells is changing with the work of organizations and individuals who aim to protect and restore them. The main part of the book is arranged in a broadly chronological order, with up to six pages devoted to each of c. 80 stepwells, every one unique in design and engineering. The name, location (including GPS coordinates) and approximate date of each well accompany color photographs and a concise commentary by Lautman on the history and architecture of the well and her experience of visiting it. While many of the stepwells are rather decrepit, their magnificent engineering and great beauty cannot fail to impress.

Victoria Lautman: Victoria Lautman is a print and broadcast journalist specializing in architecture, art and design. She was formerly Contributing Editor of Chicago magazine and Chicago Editor of Metropolitan Home and Art + Auction magazines. She has also contributed to such periodicals as Architectural Digest, ArchiDivay Gupta: Divay Gupta is Principal Director, Architectural Heritage Division, Indian National Trust for Art and Cultural Heritage (INTACH). INTACH is a non-profit organization dedicated to the conservation and preservation of India's cultural heritage.