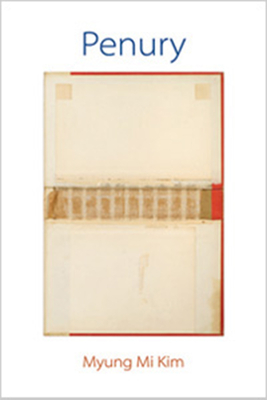 In Penury, Myung Mi Kim probes sanctioned norms of cognition by breaking communication into its most discrete components. With these irruptions and suspensions, she writes into extremes of forced loss, violence, and impoverishment. Exposing latent relations in sound and sense, Kim proposes how new ethical awareness can be encountered where the word and its meaning/s are formed. Here, language is not offered as transparent communication of ideas, but as testament to and disruption of oppressive dominant concepts and cultural practices. "Penury" means poverty, but in this text's radical relation to lack, we hear the most elemental and active forms of change.

MYUNG MI KIM is a Professor of English and a core faculty member of the Poetics Program at the State University of New York at Buffalo. Kim has also served as Distinguished Visiting Poet at St. Mary’s College, Moraga, California, and as Visiting Professor at Oberlin College. Kim was awarded The Multicultural Publisher’s Exchange Award of Merit for Under Flag (Kelsey Street Press, 1991). She also received a fellowship at the Djerassi Resident Artists Program, awards from the Fund for Poetry, a Daesan Foundation Translation Grant, and the State University of New York Chancellor’s Award for Excellence in Scholarship and Creative Activity. Myung Mi Kim is the author of Commons (University of California Press, 2002), DURA (Sun & Moon, 1999), The Bounty (Chax Press, 1996, 2000), and Under Flag (Kelsey Street Press, 1991, 1998, and 2008). The anthologies in which her work has appeared include American Poets in the 21st century: The New American Poetics, Moving Borders: Three Decades of Innovative Writing by Women, Premonitions: Kaya Anthology of New Asian North American Poetry, Making More Waves: New Writing by Asian American Women and other collections. And, Kim’s collaborations include “Spelt,” with the poet Susan Gevirtz. A collaboration with the poet, visual artist, and translator, Norma Cole, appeared in big bridge #12. The composer John Zorn commissioned her to write a bilingual Korean/English text which can be heard on Zorn’s “New Traditions in East Asian Bar Bands”. Most recently, she completed a commission from the Friends of the University Libraries, State University of New York at Buffalo, for their annual broadside.