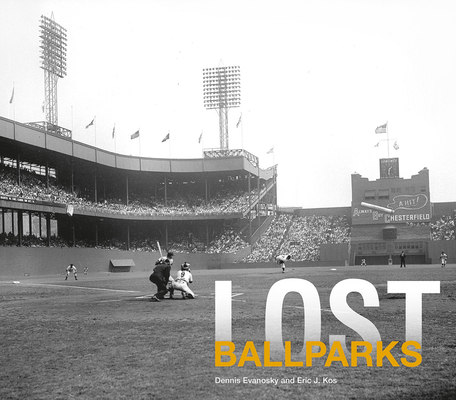 Baseball has a history like no other American sport. The Union Grounds in Brooklyn, New York, is considered to be the first ballpark ever built, when William Cammeyer decided to use the Union Skating Pond as a ground for baseball games in 1862. Professional teams followed in 1871 and enterprising owners began to invest in the creation of wooden palaces, such as the Grand Pavilion in Boston and Sportsman’s Park in St Louis.The first steel-and-concrete ballpark was Shibe Park in Philadelphia built in 1909 which housed a then-record 20,000 spectators and set the standard in ballpark design. The Brooklyn Dodgers matched that with Ebbet’s Field in 1913 and the New York Yankees trumped them with a 58,000 capacity Yankee stadium to house the legion of babe Ruth fans.Over the years the cathedrals of baseball have come, been copied and are now gone, with all but a few heavily-modernized exceptions. Lost Ballparks looks back at the most storied ballparks in baseball’s rich history.From the wooden bleachers of Boston’s Huntington Avenue Grounds to the ‘space age’ Houston Astrodome, to the tidal harbor ballpark at Ketchikan Alaska, there is a huge variety of ballparks that have fallenList of cities: Atlanta, Baltimore, Boston, Brooklyn, Chicago, Cincinnati, Clearwater, Cleveland, Dallas, Denver, DesMoines, Detroit, Emeryville (Ca), Fort Mill (SC), Houston, Indianapolis, Johnson City (NY), Kansas City, Ketchikan (Al), Los Angeles, Memphis, Miami, Milwaukee, Montreal, Newark, NewOrleans, New York, Omaha, Rochester, St Louis, St Paul, St Petersburg, Salt Lake City, San Diego, San Francisco, Seattle, Tokyo (Japan), Toledo, Toronto, Washington, D.C., Wilmington.

Dennis Evanosky and Eric J. Kos publish the Alameda Sun, a weekly newspaper across the bay from San Francisco. Dennis has written three books about Bay Area history. Eric graduated from the Rhode Island School of Design in 1977. He has written for and designed various publications before forming Stellar Media Group Inc. in 2001. Dennis and Eric first teamed up in 2004 to write East Bay Then and Now and in 2010 Los Angeles from the Air Then and Now. They are also the authors of Lost San Francisco.