Baseball America's Ultimate Draft Book: The Most Comprehensive Book Ever Published on the Baseball Draft: 1965-2016 (Paperback) 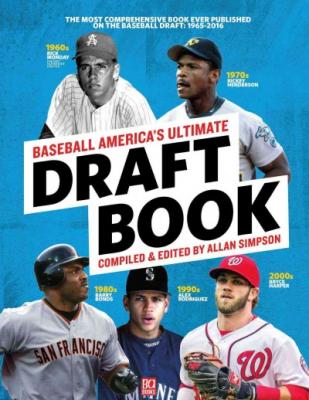 Baseball America invented coverage of the baseball draft. So who better than Baseball America to chronicle 50 years of draft history? As the baseball draft grows in prominence and more and more fans connect winning on draft day to winning in the major leagues, the BA draft book takes you through 50 years of great draft stories and the biggest hits and misses in draft history. The Baseball America 50th Anniversary Draft Book combines all the information of a great reference title with all the great stories that make draft history so rich. For every year of the draft, from 1965-2015, you'll get a complete team by team draft list, with who signed and who didn't, who reached the big leagues and who washed out. And the draft lists are more than just lists; they also feature interesting tidbits on people who became prominent baseball or in other sports or other careers altogether. You'll get the story of the most prominent storylines and people for every year of the draft, as well as plenty of charts and photos to take you in-depth on every year. This book will feature lots of information that has never been publicly available before, especially with signing bonuses from the early days of the draft. It goes without saying that anyone who has an interest in the baseball draft will have to have this book, but anyone who loves good stories (longshots that became major league stars, touted phenoms who washed out) will find fun on every page of this book.

Allan Simpson, the founding editor of Baseball America, covered the draft when no one else even knew how. In the early days of the draft, Baseball tried to deflect attention away from the draft, believing that limiting the amount of information available gave teams a negotiating advantage when trying to sign players. When Baseball America came along in the early 1980s, though, Simpson started shining a light to this unappreciated corner of the game, and since then the baseball draft has grown in prominence and become a televised event. Simpson made draft coverage a central part of Baseball America's editorial mission, introducing fans to young players as they entered professional baseball on their way to becoming stars. Now retired from the day to day operations of Baseball America, Simpson has spent the last few years digging through baseball archives to find more draft information than has ever been available before, and he pulls it all together in the Baseball America 50th Anniversary Draft Book.