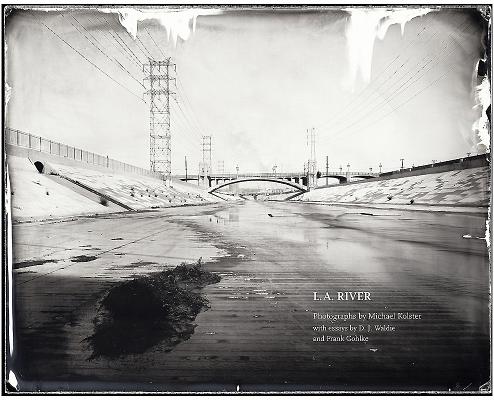 Three centuries ago, the Los Angeles River meandered through marshes and forests of willow and sycamore. Trout spawned in its waters, and grizzly bears roamed its shores in search of food. The river and its adjacent woodlands helped support one of the largest concentrations of indigenous peoples in North America, and it also largely determined the location of the first Spanish Pueblo and ultimately the city of Los Angeles. The river was also the city's sole source of water for more than a century before flood-control projects made the L.A. River what it is today. Michael Kolster, in L.A. River, relies on a nineteenth-century photographic technology to render the Los Angeles River today, from its headwaters in Canoga Park and the suburbs of the San Fernando Valley to its mouth at the Pacific Ocean in Long Beach. Coincidentally, the founding of the city of Los Angeles and California's achievement of statehood in 1850 coincide historically with the invention of the wet-plate photographic process, forever linking the city and state with the centrality of photography. The moving images that define L.A. River show a feature of the city's landscape that initially attracted native peoples to its banks and gave rise to the formation of our nation's second-largest city. Channeled in concrete during the last century to control flooding, the river was all but removed from the life of the city until the turn of the twenty-first century, when concerted efforts were made by some to peel back some of the concrete and to let nature live once again. In his photographic journey, Kolster considers both the past and present and how the accumulation of life along the river suggests a larger a role for the L.A. River in the lives of the city's inhabitants.